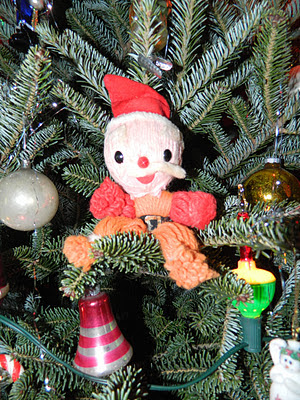 By the time I hand Jimmy down to the next caretaker, he may well be faded to all white...an ageless, timeless symbol of those ancient words that wise men and women still honor today...."Love one another...."
Posted by J at 8:40 AM 5 comments:

It has taken me many years to appreciate Christmas as an entire season to savor, instead of just one fantabulous, frenzied, gluttonous day of explosive excess. In the past, when that day ended, I would flop, exhausted, onto the couch and enter into a month long bad-mood-slump because "the fun" was all finally taken away from me. I see it differently now. I finally grew up!


My cure of that faulty thinking came about not only with maturity, but with the addition of in-laws. I guess I am just very fortunate. Each of my three new "sisters" (mothers-in-law of my daughters) is as gracious and accommodating as she can be when it comes to the question of "who-gets-the-kids-and-when?" for each holiday. Even before any of our daughters were engaged into those lovely families, each future sister reached out to make sure that my traditional dinners wouldn't be affected by their own desire to see their sons, and I responded in kind. It was as if all four of us had read the same Dear Abby columns and decided together that we would never be one of the selfish, whining, self-pitying "but what about meeee?" mothers-in-law who just can't handle being "alooooone" on Christmas Day once her children are married!

Well good grief, that-kind-of-woman! It's time to grow up! Christmas is a season, not one fantabulous, frenzied, gluttonous day of explosive excess!

And, there are so many fun ways to celebrate it for one entire month!

A few years ago, my daughters and I hosted a "traveling Christmas dinner" for their in-law parents. We wanted them to know how much we appreciated the way they welcomed the girls into their families and treated them as their own. Since the girls and I live within 10 minutes of each other, this was a fairly simple thing to arrange. Appetizers at Karen and Joe's, soup and salad at Christy and Keenon's, main course at my house and dessert and a cookie exchange with Mary Jo and Thomas. It was a great success, although our initial plan to allow 20 minutes of travel time between houses and 45 minutes to eat proved to be woefully inadequate. Everything took longer than we expected! We hope to repeat the fun in a future year, but possibly change the format to meeting and staying at my house only. The couples would still present their own course, but no one would have to pack up and travel every hour. Still, I think the girls would miss having everyone come in to see their Christmas trees and their homes decorated so beautifully. But if we didn't have to keep moving on, we'd have time to play a game, like maybe "Christmas Family Feud!" Wouldn't that be fun? Next year for sure!

One of the cutest ideas I've ever heard to sparkle up a family Christmas gathering belongs to my new sister, Vonda. Her five sons* bring their wives or girlfriends to participate in a competition that they look forward to every year. The girls are asked to bring an appetizer, and the guys, a dessert. But not just any appetizer or dessert! When the table is laden, everyone votes for their favorite. Points are awarded in categories such as presentation, taste and effort. Generous restaurant gift cards are prizes that go to the two top winners. My daughter, Christy, loves searching her cookbooks early in the season for entry ideas. It is so much fun watching her enthusiasm while she plans, observing her husband fumble around in the kitchen with his dessert. and even more fun to find out who the winners were. Last year, one of them was Christy!

And, the lovely, creative hostess? Well, isn't she one smart little hors d'oeuvre? She doesn't have to worry her pretty little head off about providing "award winning" appetizers and desserts every year!

*For the past two years, one son, Jordon, has not been home on Christmas day. He is a United States Marine, currently stationed in Japan. We are so very, very proud of him! But, it won't be too long before he'll be back to join his brothers to "fumble around in the kitchen with his dessert!"

Now that Thanksgiving is over, it's time to plan my first Christmas 2011 event! Last year's First Annual Cookie-Making Party at Grandma's received rave reviews. Since the twins were only two, and Bree, four months old, I kept it very simple. Pre-made sugar cookie dough and a table loaded with sprinkles of every size and shape and flavor - that's it! As the grandkids get older, we will probably add little gingerbread houses to the menu. But for now, both moms have expressed to me how nice it is for their children to be able to enjoy a messy cookie making session without having to squeeze the activity into their own busy December schedules.

This year, for the moms, and Aunt Karen too, I'll again have a lovely champagne and raspberry liquor drink accompanied by appetizers. I'll make an elegant soup and festive salad. There will be door prizes too. Lots of fun ahead!
﻿﻿
﻿﻿In the meantime, here's a few pictures from last year's event! 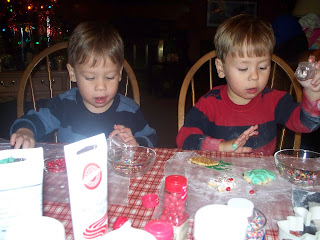 No "double trouble" here! Only double cuteness, double fun, and double the amount of cookies!
Posted by J at 6:18 PM No comments: 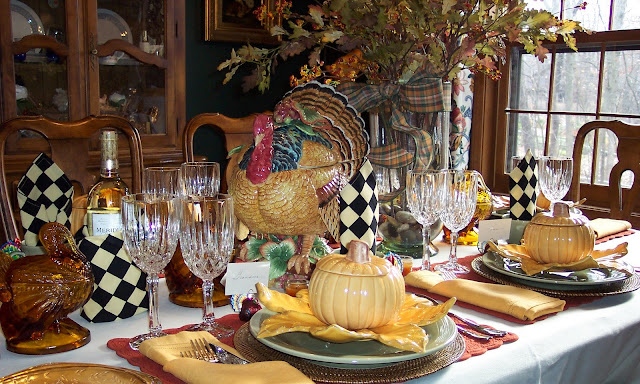 I am eternally grateful to you for the people who will join me at this table to hold hands in thanksgiving for things you have given us, and for things you have not given us. For it is in the grateful recognition of things denied us that we are given renewed understanding of your divine, parental benevolence which sometimes must say, "No, I love you too much to give that to you!"

I thank you too, heavenly father, for the wisdom of all grandmothers. No, not one of us will ever know the answers to all of the questions, yet we will always know the answer to the most important one! How did you manage to do it, Lord? How were you able to give the cutest, the brightest, the sweetest and the most precious grandchildren to each and every one of us?

Amen!
Thankfully,
Joyce
Posted by J at 10:37 PM No comments: