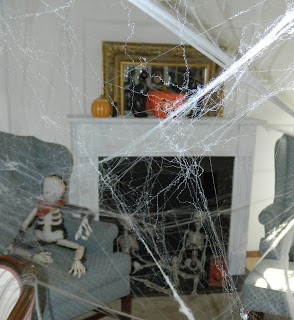 If I didn't have six cats, I could decorate days in advance for my parties and reduce stress by volumes!

But that is not the case over here! Special effects, such as a living room crawling with spider webbing need to be completed at the last minute due to the "help" I get from the feline crew!

Every year my guests are required to plow their way to the party room through a nearly impenetrable maze of webbing.

Annoying? Yes! But while you love your kids to pieces, they do, occasionally, annoy you too! Here is your chance to annoy them! - in a pretty clever passive-aggressive way!

The best part of the party, for me, was when the two moms unwrapped their framed ghost pictures. These were printed from the cute little feet of their children - by grandma, of course! They loved them! 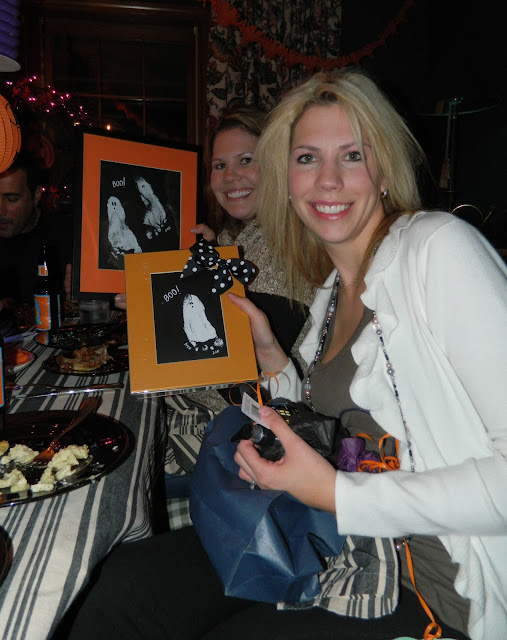 As far as the success of the "Whoopee Cushions" planted on the seats of the three  guys, well.....not so much! Can't decide if the reason was because they are all just too smart and too observant or, around me, they are just too wary of "surprises" - or if, as Christy suggested, I am just "too obvious!"

But there were a few things that everyone agreed on! The "monster" slowly emerging from behind the couch was effective (Karen screamed!), the food was "awesome," Bingo was "lucrative" (especially for Joe!) and the company was the very, very best!

Not sure about what I am going to do next year, but when I announced that I might make some changes to make it more exciting, the girls looked at me, horrified, and demanded, "WHY?"

No! WAIT!
Mary Jo, who, like me, suffers from "Competitive-Oldest-of-Three-Daughters-Syndrome" has something to add.....

Well, eleven days left before Halloween and we still have some important decisions to make! First of all, Charlie needs to decide whether he will be a ghost this year or, like last year, a snowman! Thank goodness he's a cat and doesn't complain about those being his only two choices!

In any event, the best way I know  to save money on cat Halloween costumes is to adopt an all white cat!


Now, I need to decide if my gigantic papier mache witch will make an appearance this season! I made her last year during the summer. If you are unfamiliar with this media but love show-stopping party props without spending hundreds of dollars on stuff that will sit in storage for 11 months (and scare the "hell" out of you every time you go down into the basement.....not that this ever happened to me or anything!) then you do need to get familiar with papier mache! My witch joined these "regulars" at my annual family party........
﻿﻿﻿
﻿


Newspaper, flour, water, masking tape, paint and lots of crazy finishing touches are all you need! Cheap! Just bunch up newspaper and tape it to hold. Make a body and head shape. Mix flour with water until you have a craft glue consistency. Tear newspaper strips. Dip strips into flour paste. (Cat owner? Warning! 3/4 of my cats try to lick the paste - ewww!) Cover form. Minimum 3 layers. Allow it to dry for a few days. Paint and decorate! And if you think you're not "artsy" enough?....oh for heaven's sake! It's HALLOWEEN! Anything goes! And that includes the dust on everything in my house!.....seasonally categorized as "decoration!"

Saturday is my party for the "kids." Today is Thursday and I've been busy decorating all week. The best celebratory effect comes from the crepe paper streamer "tent" I put up every year. Attach long strips in black and orange from the center lighting fixture to all 4 corners of the room. Nestle spooky creatures in the fixture on branches spray painted black. Large spiders are great, but so are vultures! Here is one of my silent sentinels! 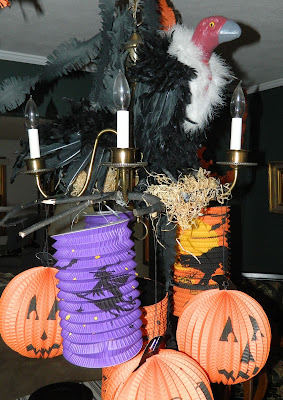 For efficiency, I bring the black dinner plates out days early, but in my house they need to be run through the dishwasher just before party time - just in case! One year I caught one of my cats curled up in a cute little ball dead-center on a dinner plate just before show time! Around here, you never know!


One last thing on my "to-do" list for today! Set up the whoopie cushions! This year I am placing them on the guys' seats, covering them in black fabric and enlisting the girls to help by having them tell their husbands that they are playing a trick on me and they should sit down together only when signaled! Will it work? I will let you know! On one hand, all three of the sons-in-law are pretty smart guys - on the other -  well, basically, they are guys! Hopefully they will be distracted by the food and free beer - until they sit down, that is! That is my hope! We'll see!

I looooove Halloween! I love the way fall colors warm up my house and help me get over the fact that summer, sadly, is now over. I love playfully cute Halloween decorations that can be tucked among autumn hues, appearing a few at a time beginning on the first of October and totally taking over my house by mid-month. I love how, even though my inventory of those things is very healthy, there are still designers out there who create clever new things to add to it every year.

Here's an example! First it was just the pathetic string of fall leaves. The pumpkin lights came next, followed by the ghost. Last year, the really cool rats came to join the fun!

My ghost, bought at a gift shop, is about 22" tall but I saw similar ones on Pinterest a few weeks ago. A lady makes them on tomato cages. They are basically just starched white sheet fabric with white Christmas lights inside. Wouldn't a pair of them look great on your front porch?

My rats are BIG, snarly-looking, and their eyes glow red and slowly flash on and off! I love rats!

The highlight of my Halloween season is the party I host for my three daughters and their husbands. Just them. No grandkids. On party night, babysitting is the job of Nana and Grandpa!

The traditional party began before the grandkids came. I have since offered to turn it into a mid-day "family" one to include them, but the response I get is a resounding "NO!" The six of them simply enjoy the time together to savor the annual dinner of Martha Stewart mac and cheese and her rib and homemade sauce recipes that are so good it's scarrrry!

In addition, there are always a few new surprises awaiting the "kids."

Three years ago, I left a note on the front door stating, "ran to the store - come on in - BRB!" Among the many decorations, (almost too many to behold!) I sat silently in a chair in the dimly lit dining room dressed in black and wearing a skull mask. When the girls started to get a little annoyed, wondering, "Where's mom?" (some things never change!) I slooowly arose from my chair! Yes! I did scare them! Well, the girls at least!

Last year, the same note was left on the door, but that time, the joke was on me! I laid down beneath the dining room table, hoping they would gather around it to admire the lavish setting. Then I would firmly grab the ankles of the 2 most squeamish guests (Karen and Christy!). While I waited patiently and soundlessly, stifling laughter with my back breaking, the guests did everything but cluster around the table! They checked every closet, bathroom and hiding place in the house. I heard Thomas (son-in-law #1) become totally frustrated and announce loudly that he didn't really care where I was as long as he could dive into the mac and cheese before it got cold - and then he helped himself! Yeah, I think it was then that I decided to come out of hiding!

This year the girls have reminded me several times that they all hope I hide again - and I already have my idea! How about slooooowly rising from behind the family room couch wearing a huge, ugly, ugly monster mask once they are all assembled? Yep, I think that's what I am gonna do for sure!

Here's a picture of my table from the past. I found glow-in-the-dark martini glasses and used mixes from Stirrings to make great drinks. Those glasses were wonderful! They lit the table with an eerie ambiance and continued to glow until late the next morning. One rule about the drinks - when blueberry flavor was used, guests had to request refills by asking for "More boo!-berry please!" The same applied to "blood of the vampire" for cranberry, and "swamp juice" for lime. Otherwise, requests for more were ignored! 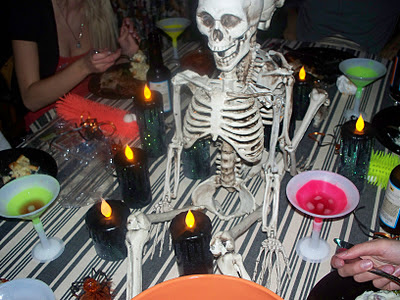 One year, after the eats were gone, I passed around a basket of those little Halloween character wind-up toys. Each guest selected one, named it, and lined it up at the starting line - which, on this striped table cloth, was an easy task! Some of the toys veered sideways and fell off the table, others ran out of "gas" after a few inches, but the ones belonging to Mary Jo and Keenon (son-in-law #2) battled it out in a final heat for the prize. I really don't remember who won, but what I do remember is a picture of six "twenty-somethings" gathered around the table, laughing with hilarity and cheering on a two inch plastic wind-up skeleton, monster or witch. Priceless memories. No one ever really outgrows having fun!

We play Bingo every year! I think I am a little embarrassed to say how much cash I give away, but we do play about 20 games and no prize is less than a $10 bill. I stash the cash inside envelopes and put them in one of those bowls with a motion activated monster hand. Last year the stupid hand refused to work, but there's something about tradition; the money still goes into that same bowl and, again, if a winner wants to collect a prize, they must yell out, "BOO!" and not "Bingo!"

I always have a little party favor for the girls too. Usually it is a small decoration, but this year I am going with a ghost theme. I used an idea from Pinterest and made framed prints of white painted footprints of the twins and of Bree to make these adorable little keepsakes.

That's an advantage of lots of babysitting time alone with the kids! Paint their little hands and feet all you want and mom and dad will never know what you're up to! I snuck the footprints home, painted on ghost eyes in black and names and date in white before framing in purchased mats and frames for less than $6 each. 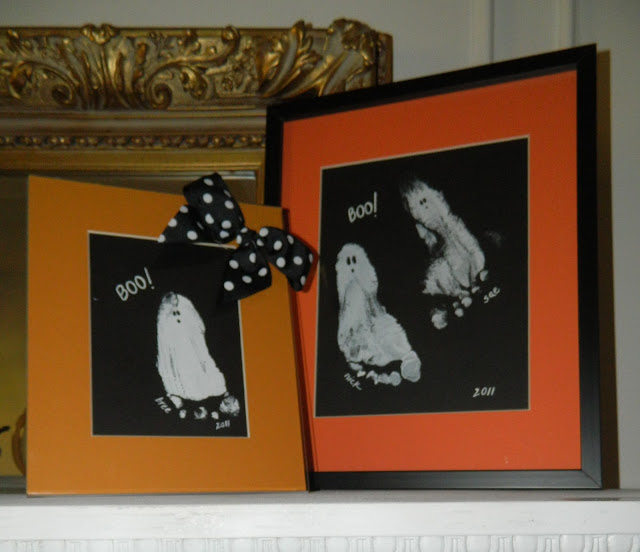 Before I post this, here's a picture of 2/3 of my cats enjoying the motion of falling leaves and of the frisky little chipmunks who live beneath our porch  - and I am pretty sure, inside of our walls, too! (Oh dear! Probably not a good thing!) 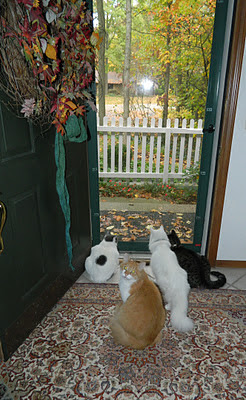 From left to right, formerly feral Annie and Mickey; rescued Charlie, and Iggy.
Katie and Rosie had other things to do at the time of this photo shoot!