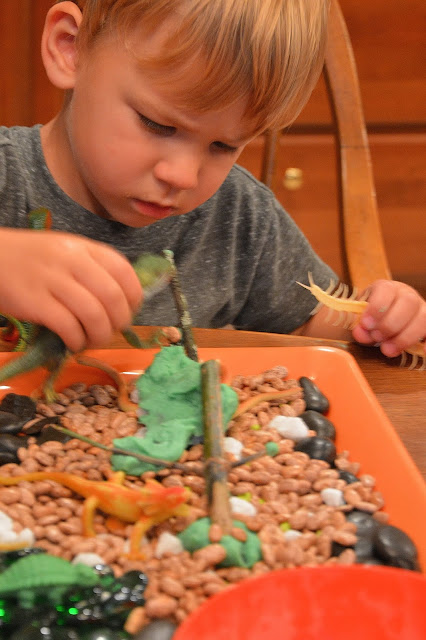 I have to admit, keeping a two year old fruitfully occupied is a challenge. Collectively, they're famous for a few things: wriggling, whining, and wailing. When you're not looking they'll pop anything smaller than a basketball into their mouths, swallow it, and run. Oh sure, they're cute as a bug and cuddly as a kitten, but that's not to say that babysitting stints don't push every high alert button on each of grandma's five aging senses!

I was given a bit of short notice this week for hosting two year old Channing (top photo - isn't he just presh?) and his older sibs for the good part of a day. While four year old brother and I usually pass the time with vigorous board game rounds, and newly-nine sissy learns to sew or sculpt, this little guy needs all eyes and ears on deck for the duration!

What's a grandma to do?

Pinterest parents tout "sensory bins" as lifesaving devices, and I've observed my own daughters' success with them. Pounds of colorful pasta and rice fill tubs to the brim. Sandbox shovels are offered to temperamental toddlers who dig in with delight. Those burial grounds for plastic treats and goodies keep them safe and happy. Mommies are free for an hour or two to sip from a coffee cup (or wine glass, perhaps, depending on how the day is going!).

My "Treasure Tray" version for Channing began with a trip to Dollar Tree. Mostly in the floral department. My goal was to create an enticing play yard of movable parts (beans, gravel, stones, sticks) for manipulating into a dino habitat. For less than $12 I snatched up ingredients enough to entertain not only that little guy, but his siblings as well - with plenty of stuff left over for next time! 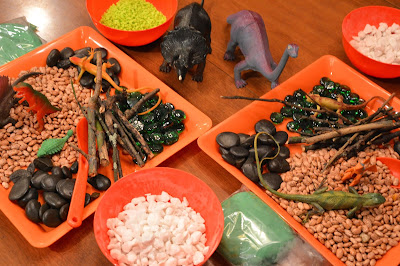 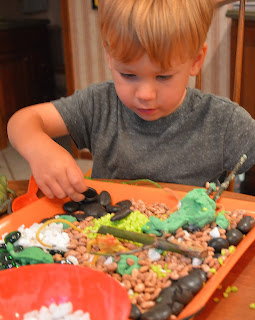 To complete our stations, I snapped off a handful of backyard sticks, supplied a pair of plastic spoons, and made a recipe of play dough to divide. Lizards and dinos were characters we already had "in stock," but Dollar Tree has similar creatures looking for a friendly home if you're in need of them! 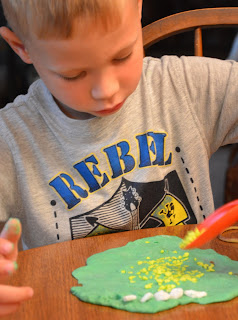 Photo documented: expressions of intensity as critter parks spring alive with trees and bridges and ponds that glimmer. Paths of stone, barriers of brick. Islands controlled in random chaos. Oddball extras with purposes known only to their youthful creators!

I hand this one to the Mommy World. It works! Busy little boys dove right in for nearly an hour, delighted with free range play, sorting exercise, and sensory satisfaction. I thought sissy might turn up her nose, but I was wrong! She dug in, too, constructing a sophisticated oasis to populate with a handful of small plastic reptiles. 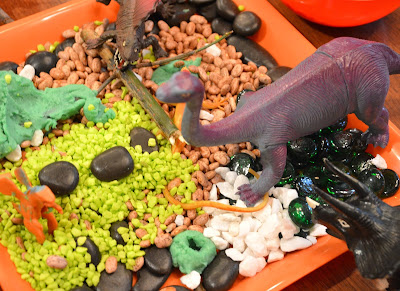 But be cautious, grandma! Nearly 100% of ingredients for this activity pose a swallowing hazard! 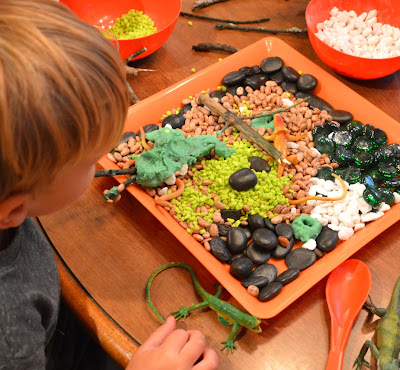 In fact, at drop-off, daddy advised me that he'd dealt with a "play dough up-the-nose" incident that very morning! Yikes. It makes sense: sit next to your little designer and watch every move made. It's also your chance to supervise practice on "what goes in," and "what stays out" of the mouth! - and ears, and nose, too, I guess!


And, of course, the activity makes a mess! Especially when you incorporate play dough into the mix. I thought it was worth it - the additional tactile experience - to vacuum (and vacuum, and vacuum, and vacuum....!) globs of it from the rug. But that's up to you. Had it not rained, we'd have been out on the deck, enjoying a sweep-away experience. I'd have also offered bags of colored sand, way too messy for indoor play. Next time, a plastic Dollar Tree tablecloth will cover our space and I'll just swoop everything up to toss when we're done.

Other themes, too! As she worked, older sissy, Brielle, and I brainstormed more fun. We have zoo animals here, fairies, and insects. They wouldn't mind their own kid-built habitats, too. I mentioned that my shopping spree also netted a bag of black beans, and how I admired small sparkly spiders on the rack. "HALLOWEEN!" we shouted together. And that, I believe, is what we'll be busy with next!

Five years ago, I scored another big project hit at Dollar Tree with the Pennywise Play School Set I made for Brielle. Many of the items I used (or ones very similar) are still on the shelves, making that store a "must-stop-by" for any grandma looking for unique, economical babysitting fun!
Posted by J at 1:39 PM 1 comment: