A Splendid Evening at the Theater!

I don't have to tell you that kids love to perform for an adoring audience of relatives. So, if you are a grandma who is shameless enough to gather in the entire family to SELL tickets, concessions and even "parking permits" to, you can guarantee that the grandkids will rake in a bundle! That's what we did this past Saturday and it was a (profitable) blockbuster!

Our event was a puppet show. I found this little table-top theater a few years ago and hoarded it all this time. When I first showed it to the twins they had fun with the puppets for awhile, and then launched into "boys will be boys" mode, dragging out their toy tool set and "building" the theater from scratch. Who was I to argue about that? It made a perfect opening for the e-vitations I sent out......... 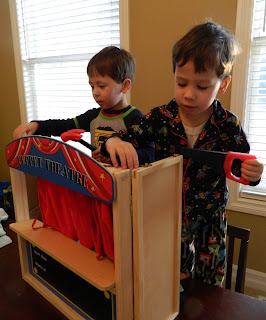 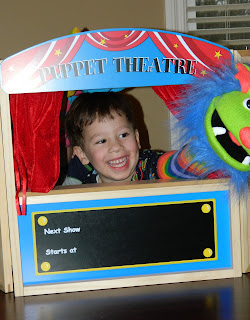 And if you have a PUPPET SHOW, you can invite mommy, daddy, grandma, grandpa,
Aunt Christy, Uncle Keenon,
Cousin Bree, Aunt DeeDee, Uncle Joe and your cat, Raisin!

And if mommy, daddy, grandma, grandpa, Aunt Christy,
Uncle Keenon, Cousin Bree, Aunt DeeDee, Uncle Joe and your cat, Raisin, all come to the Puppet Show, you can SELL them tickets and refreshments!

Well, we built a PUPPET THEATER and we have a PUPPET SHOW so consider yourself
INVITED!

Now, who is going to say "no thank you" to these cute little boys who worked so hard to create such a wholesome family event? That's right! No one! Attendance? 100% !

Planning and preparation are basic requirements of a successful business venture. Our puppet show was several weeks in the making. Mommy helped the boys practice their routine. It had to be longer than two minutes and tell some kind of a story. Customers expect that!

Meanwhile, grandma was busy down in the basement creating a concession stand out of a concoction of cardboard boxes, foam sheets and a litter of streamers and paper scraps. Also on the list of "things to do" were visors for the proprietors, pocket aprons for stashing profits, an inventory of snacks to sell and a roll of tickets for customers to buy.


I decided to make a "Happy Meal" for Brielle's parents to buy for her. String cheese, mini-muffins, a fruit cup and, of course, a little wind-up bear for the prize were stuffed inside this clown-shaped bag.


We set everything up while the boys took naps. Once they were up, everything started to happen!﻿ 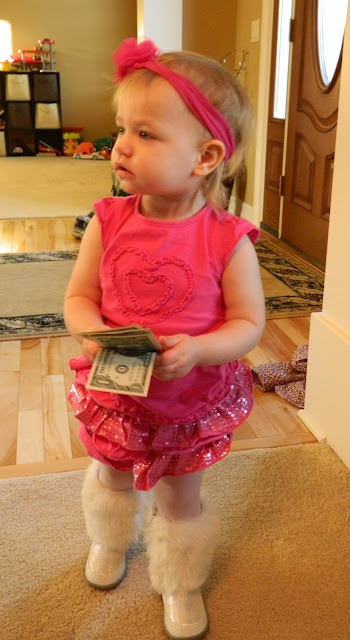 And this mini-sized customer was adorable, hungry and had MONEY to SPEND!
"I'll have the Happy Meal, TWO popcorns and ALL of those candy bars, please!" 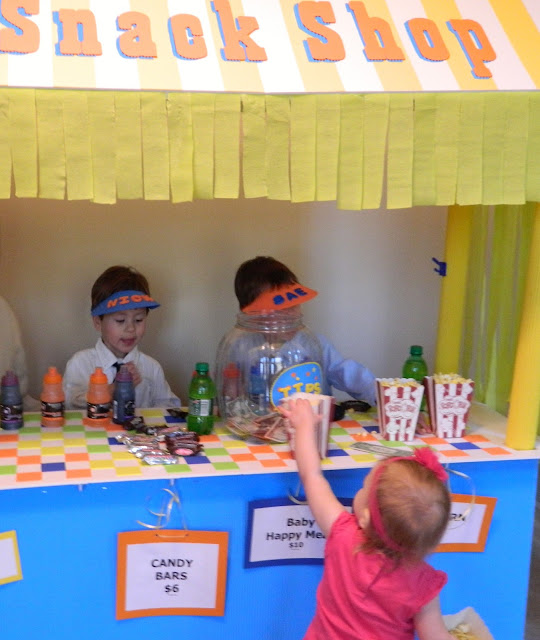 Business was very brisk! The money was rolling in, the tip jar was filling up......... 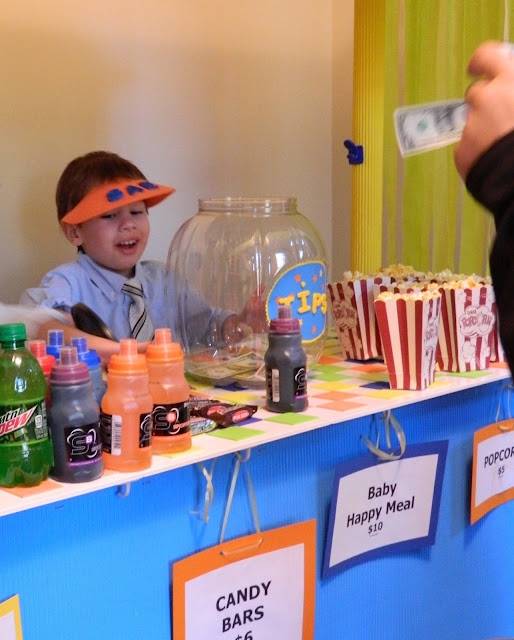 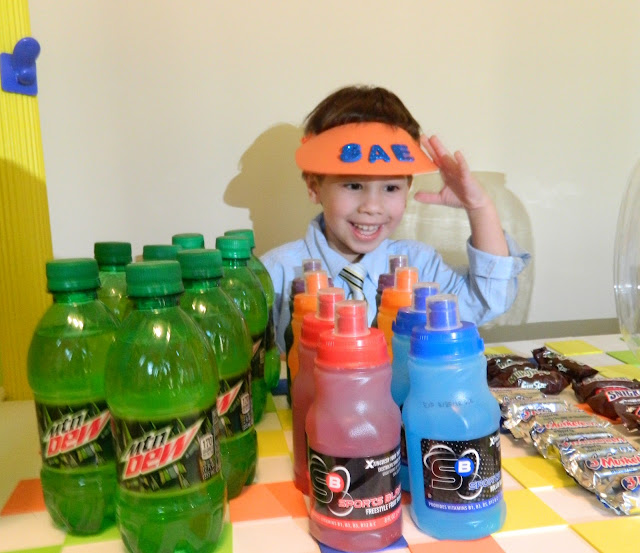 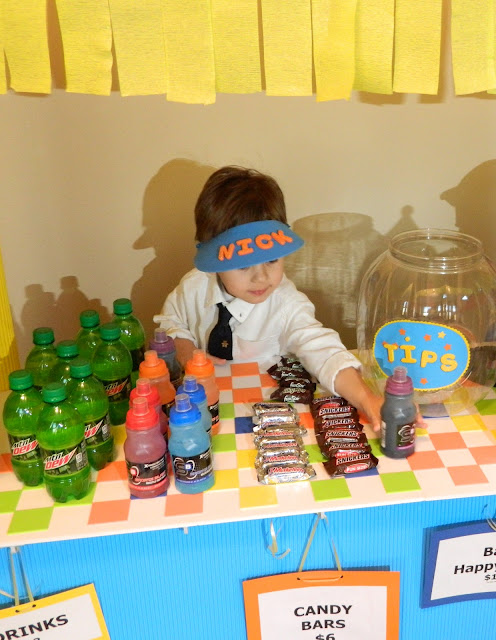 But all good things come to an end - and this one ended with a near sell out!
Brielle decided to verify this for herself....
(and some people wonder why the family affectionately refers to her as "Busy Body!") 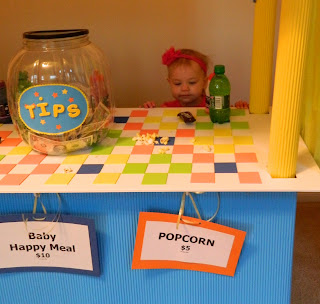 OKAY! SHOW TIME! Since the boys are really into opening and closing gates, I decided to rope off the foyer from the family room where the puppet show was to be held. After the snack bar closed, the boys removed the rope and requested that customers form two lines so both of them could sell tickets. Here is Sae, fully engaged in "crowd control!" 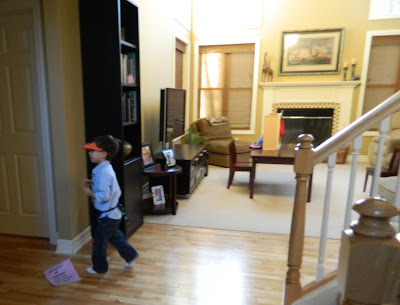 ﻿﻿So, did the puppet show last more than two minutes? Did it tell the audience a story?  Ummm....well, nooooo, "perhaps" not exactly! But it did earn the two co-puppeteer/entrepreneurs a lasting, enthusiastic round of applause and a well-earned final bow!

And then we gathered for the promised "free-with-ticket-purchase" taco buffet. Mary Jo prepared a sumptuous outlay that included a "bottomless" Margarita pitcher for the ladies! More applause!

We saved a most important task for after dinner. Money needed to be counted and profits split between the two little proprietors. Daddy stepped in to help, announcing that a whopping $38 was earned. The boys efficiently stuffed their cash into new wallets (dinosaur design for Sae, tiger for Nick) that grandma purchased for the occasion of their first experience as "businessmen!" 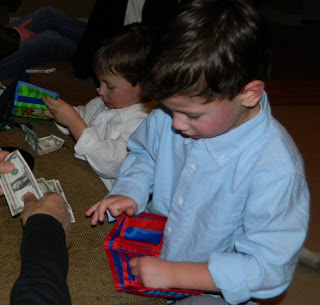 At least for now, plans are to spend earnings on a mighty handsome toy Mack truck. A suitable choice considering that these young men "did all that work!" (wink, wink!) Hey! That's what grandmas are for, right?

And, speaking of grandmas.....well, you don't think this one is going to end the evening without one more blast of crazy family fun, do you? Get a load of these....... 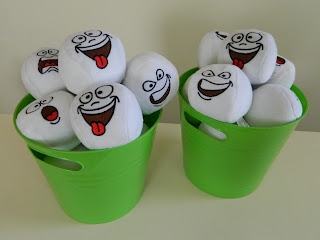 I found them at Oriental Trading and ordered three dozen. The boys passed them out, and grandma had no chance to yell, "SNOWBALL FIGHT! before they started to fly!

I did take pictures - when I wasn't a target - during the ten minute melee that ensued, but alas! - each was a blur of white projectiles and three generations enjoying what Uncle Keenon said was "the best part of the whole evening - very well worth what was over-spent at the concession stand!"

After grandma and grandpa collapsed on the couch, exhausted, we watched the twins roll around on the floor like a cute little pair of drunken monkeys, wrestling with each other, daddy, and two uncles they absolutely adore!