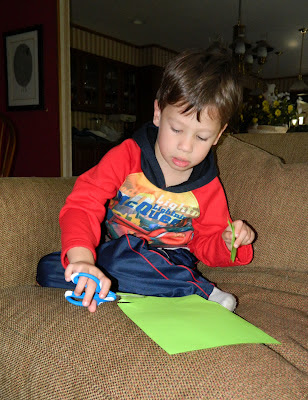 Until now, our quarter acre of backyard woods was just something beautiful to enjoy through rear windows. I rarely ventured into that tangle of vegetation during the 27 years we have lived here. But that was before a certain pair of three year old twins entered my life, giving me many good reasons to explore that suburban wilderness with new and curious eyes! 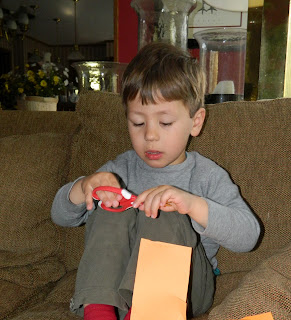 On a recent hiking trip through those trails, one of the boys made the comment, "I hope we don't get lost back here!" Well don't worry, little guys! Grandma (and Roxie) are here to guide us all back home...at least for today! That thought comforted for mere seconds. Terror and panic replaced it. What about days when grandma isn't right here? A disquieting picture flashed through my mind.....lost little boys huddled together in darkness for warmth and comfort beneath a tree, shivering in fear lest the gruesome occupant of the gingerbread house tucked into the woods ahead approaches them with a cackling....."nibble, nibble little mouse...." What are they going to do then????? It was obvious. A suburban wilderness survival skills workshop was in order. And who but grandma was best equipped to teach it?


I've never been a fan of pop culture stories that are becoming staples in kids' home and school libraries today. I owe that attitude to my wise mother, who years and years ago introduced me to the enchanted world of fables and folk and fairy tales from around the world. While it is true that many, if not most, of those quaint stories entertain violent characters.....child-eating witches, beanstalk-dwelling roaring giants ......they also describe worthy messages and transport young readers into fanciful arenas unlike any that exist today. I simply prefer the imaginative depth of those evil ogres to currently popular talking cars and perky little bug-eyed clown fish!

My suburban wilderness survival skills workshop began with a reading of the fiery old German folk tale, Hansel and Gretel. I carefully prefaced it, telling the twins that this was only a story and that it involved a pair of siblings who resolved their fear of becoming lost in the woods with the use of a practical tactic. I hoped the story wouldn't plant an idea in those cute little heads that a scary witch also resided in grandma's backyard. Well, never mind that! All the boys wanted to do was repeatedly examine the picture of the witch! Once satisfied, we brainstormed our own ideas for marking a path through the woods that wouldn't get eaten by birds like the breadcrumb trail that Hansel and Gretel unwisely experimented with. How convenient that grandma came up with the idea we used, having all the supplies readily available! The plan was to mark a trail with bright color paper squares, cut out by the boys. Sae chose green, and Nick, orange. Then we would return home by following the same trail back! Brilliant! 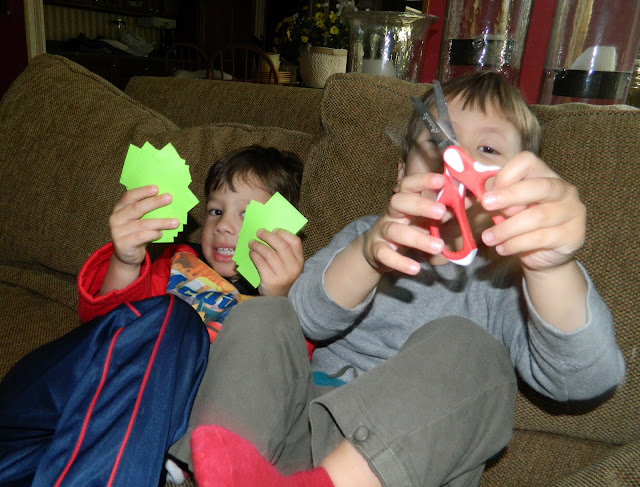 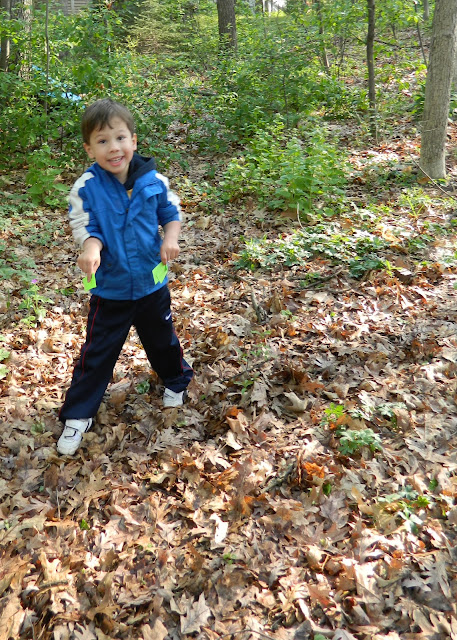 This is how we marked our trail so we could find our way back to the safety of grandmother's house! 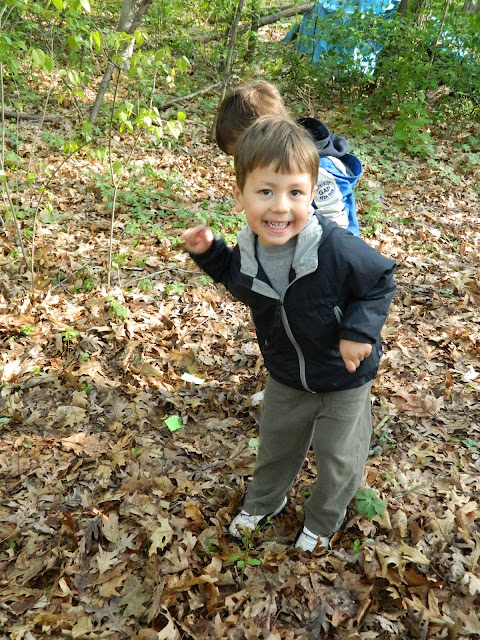 Before long, our supply of trail markers was exhausted and it was time to turn back, following the true path that would take us home. Thank goodness for wise foresight! We encountered many forks in the road that could have mistakenly been taken had there been no markers to follow! And who knows what could have lurked at the end of those unhappy trails? (An ugly witch with a hungry wall oven perhaps? YIKES!) 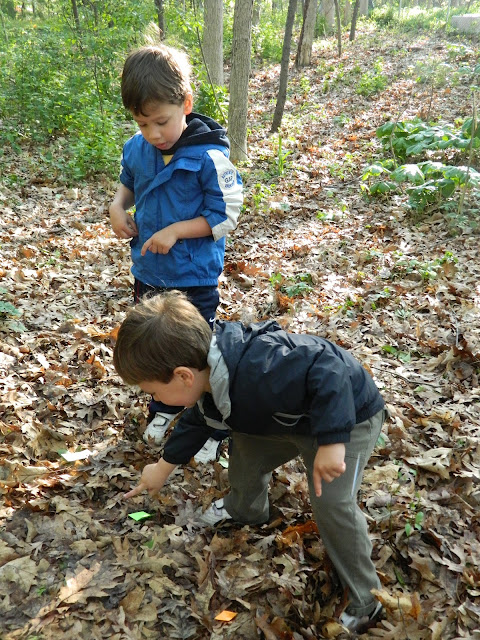 HOME AT LAST! With the clearing in sight, we triumphantly waved the last two markers - symbols that validate the day we learned how to fearlessly conquer the suburban wilderness! 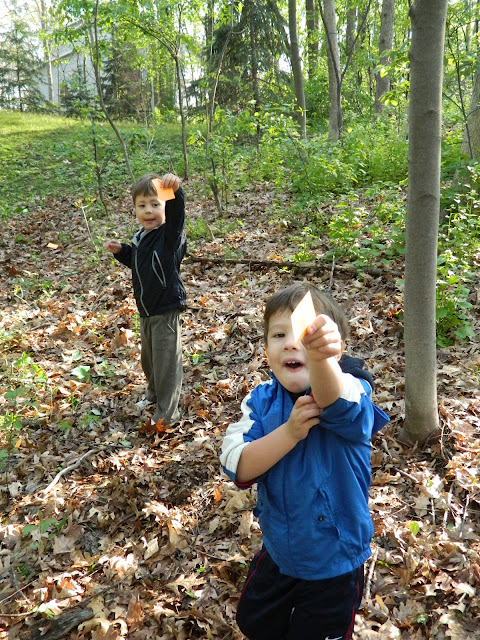 So, again I pore over volumes, now a half-century-old, of the My Book House collection that I last enjoyed when I was a beginning reader. I am seeking similar fairy tale based experiences to enjoy with grandchildren. My intention is to pass on to the next generation my own fascination with ages old "goings-on" in countries and cultures far and wide. Anthropomorphism was, apparently, a popular storytelling device in those eras, too. Talking nutcrackers, frog princes, and the half-frozen bear who chanced by the humble cottage of Snow White and Rose Red......I'd like my grandchildren to park their chattering cars in the garage once in awhile and get to know all of these characters too!
Posted by J at 12:22 PM