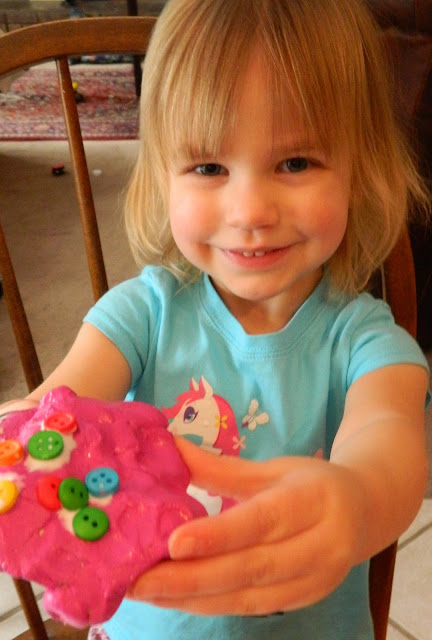 What's small, round and cute, fits nicely into the palm of your little hand, is able-to-see-quite-well-thank-you-very-much through a pair of plastic wiggle eyes, lives in a box, swims in a puddle, climbs on the rocks, snaps at a mosquito, snaps at a flea, snaps at a minnow, snaps at me, and goes pokin' along on a string after being made at grandma's house on an afternoon full of sunshine and fun?

Pet turtles for everybody?

Pet turtles for everybody! YES!


I actually remember being a Kindergartner (over half a century ago!) and thinking I was "all that" because I made my own little walnut-half turtle who busily rolled along, powered by a marble hidden beneath his shell. My little guy was one of a very sparse inventory of craft projects we made from things that were free. Welcome to the 50s. Classroom art cupboards held paints and paper. Nothing more.


I also remember stringing together paper caps, ones diligently saved from glass bottles that delivered morning snack milk. Stupid white yarn! It snarled at me and tangled, and in frustration I tossed it beneath my table. The dark shadow that immediately appeared behind me was Sister Conrad. She called me a naughty girl and made me retrieve and complete it. Who in their right mind would ever want to wear the "belt" that bungled mess eventually became? Not me.

And those two projects - the very best and the very worst - are the only ones I remember from my inaugural year as a student. 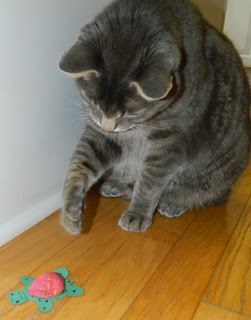 Unless you live next door to a tree farm with a friendly neighbor, you might have difficulty finding whole shell English walnuts at times during the year other than Christmas. I had some then, but handed them out a few each day to our friendly little backyard squirrel, "Nut Case." Last week I ordered some online. Paid more for shipping than the one pound bag I received. But it was worth it. This grandma was in a turtle-making mood and anxious to see if critters who charmed her past would have the same effect on the grandkiddoes today!


In our family, everything's a cat toy! Bree's pet, Ted, thinks she made this one for him. 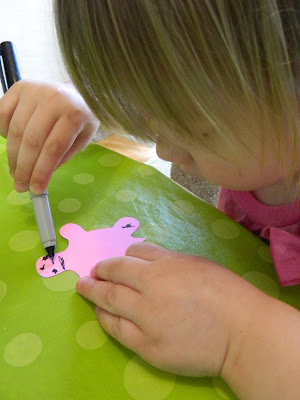 Draw a free hand turtle outline a bit larger than the walnut half on card stock and cut it out. Kids can paint the shell and draw features on the body. Cut a hole a bit smaller than a marble in the center of paper turtle. Place marble inside the shell and glue body in place over it. Pull a needle with a long length of heavy thread through the nose and knot to complete. 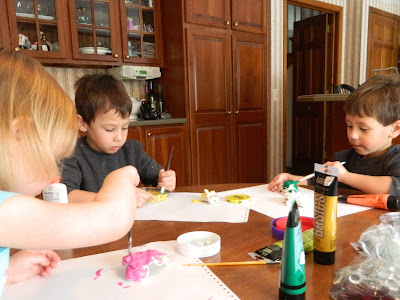 Yet why settle for one species when you've got the audience to launch full scale Turtle-Mania? We had leftover air dry clay from several successful past projects and decided to see what happens when you connect six ovals in three different sizes. Our little critters looked terrific in their stylin' acrylic colors and there weren't enough buttons on the planet to decorate the shells they call home. 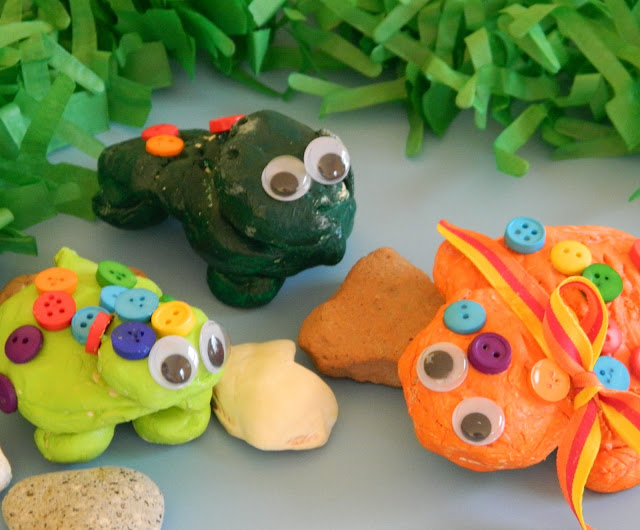 *Vachel Lindsay wrote The Little Turtle poem for his niece in 1918, well before even I was born! (really!)
Posted by J at 8:04 AM