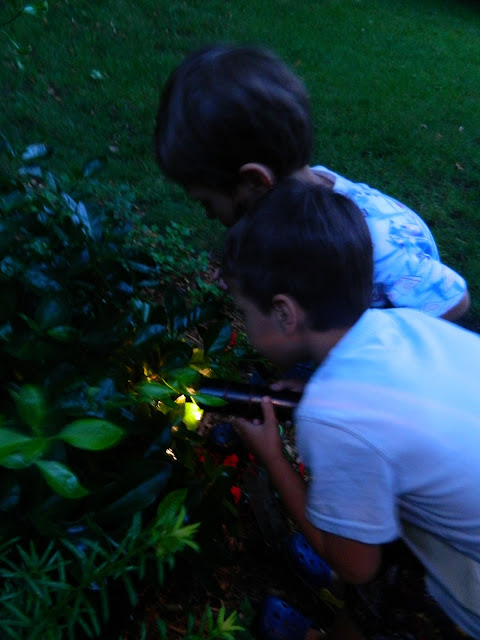 Oooooo.....they're not kidding when they say the outside holds a host of new observations and sensations once darkness descends upon it. For this reason, nature books often challenge adults to take kids on a night hike through the neighborhood. And so we did that, my grandsons and I.

With flashlights in hand, children cannot help but note things that are easy to overlook during the day. Distractions are minimal and the smug satisfaction of being up waaay past bedtime contributes to a conspiratorial camaraderie. A hint of danger lurks within the deep, dark backyard woods, keeping otherwise adventuresome little boys close at the side of grandma.....who, in turn, looks to fiercely protective Roxie (a German Shepherd mix) for her own half ounce of bravery!

But where to look first? There were spooky shadows to make on brother's face and some intense inspection of a cable box. It was up to grandma to steer us all toward things less obvious, yet far more fascinating!

Look quickly! Tiny insects "chill out" on top of bark until you shine a light. Then they scamper to hide in the blink of an eye - all of them!

We accidentally rustled a bush and observed a moth take flight from its protective cover. Does that mean insects hide beneath leaves? Well, let's take a closer look and see!

Those weird noises you hear only in the dark come, in part, from little brown toads. We found not one, but two clinging easily to shutters on the house. Later on, we'll look through books to find out why those little toes stick so effortlessly!

And then, at last! The errant flicker of a firefly - and his brother! Oh, and there's another! Was I actually quick enough to capture one in action here, or was that just the neighbor's porch light? Some things even grandma doesn't know -
secrets keep very well in the dark after curfew has paid visit and found only empty beds!


I did, of course, seek and receive parental permission for this late night sleepover adventure, and I do advise it, even for those who live by the "What Happens at Grandma's Never Happened" policy! When we came back inside, the boys insisted on calling mommy and daddy (11 P.M. by now!) to chatter on and on about the fun they had outside at night, bravely tiptoeing the line between the chill of excitement and the danger of darkness. They want to do it again and again and again!

And so we will - to just enjoy whatever it is that we see - "taking only pictures" (most of them very poor!) and "leaving only footprints" - heeding classic, wise advice to those who own respect for every living thing. Sure, we could have easily captured, imprisoned, inspected and released a specimen or two, but every creature has things to do and needs to get them done. Besides, we are well tutored in a benevolent way of living. Poems by Christina Rossetti are among our favorites, and we heartily applaud her admonition to:

Hurt No Living Thing:
Ladybird, nor butterfly,
Nor moth with dusty wing,
Nor cricket chirping cheerily,
Nor grasshopper light of leap,
Nor dancing gnat,
Nor beetle fat,
Nor harmless worms that creep.

And on that peaceful note I say, "Goodnight, dear friend. Goodnight!"