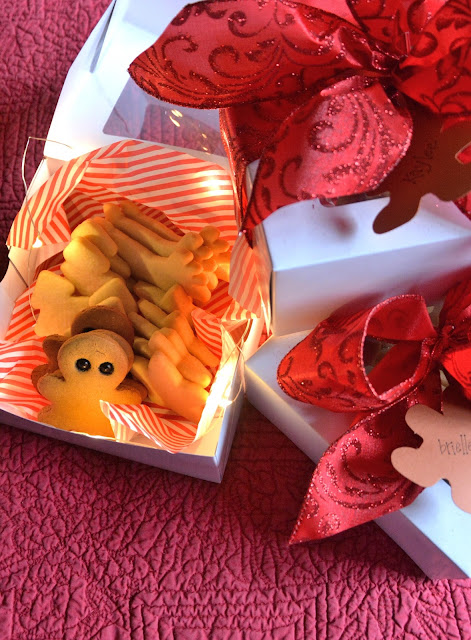 They whined and they wailed and they wore me down, so I invited 'em to join us. "Kids?" you're thinking? Nope. Daddies this time! Guess we were having too much fun without them at Grandma's Annual Christmas Cookie Baking Parties. Traditionally, only kiddoes and their mommies were included. This is our fifth year of fun, so I relented. Beginning with the guest list, it was time to make a few changes!

I like my guests to arrive with sanity intact, so we celebrate on a Friday evening, somewhere on the calendar between the arrival of Christmas spirit, but before that annual "Help! I'm-never-gonna-get-all-this-stuff-done!" frenzy sets in. That's the first of grandma's "tips to the wise" to consider!

I welcome the kids to nibble on fruit skewers and scraps of goodies their parents pick and pull for them. Those come from a candlelit table laden with gourmet appetizers. (I let Trader Joe's do most of the "cooking" for me!). My, my! There's a steamy cheese fondue surrounded by crisp pear slices and chunks of toasted baguette. A tower of seafood commands tabletop center; it's home to coconut shrimp, crab won-tons, shrimp toast and more. All kinds of dips, too - spinach and smoked salmon among them, along with olive tapenade and a nice variety from the tasty hummus family, including an unusual beet flavored one. There's stacks of slices too - rye breads, cheeses, smoked salmon, and an array of flavored (truffle! beet! garlic and rosemary!) mustard to try your luck with. Baskets groan with pita chips and water crackers, inviting guests to spread the spiced salami (Nduja) - something I'd never heard of before, but just knew the guys would gobble up - and, of course, along with marinated sweet red peppers and ginormous stuffed Greek olives - they did exactly that! 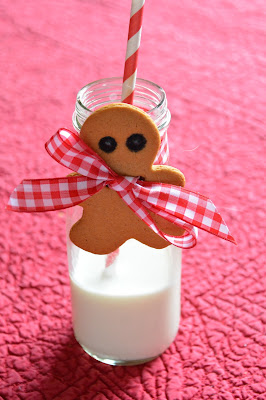 But that's not all! Heaping platters of our all-time family favorite, Martha Stewart's Gourmet Mac and Cheese waited patiently on the side board. I made a double recipe, reserving generous take-home quantities for everybody.

We stuffed ourselves silly, washing it down with TJ's Grower's Reserve Chardonnay - or a nice, cold serving of milk, depending on the year-of-birth displayed on your driver's license! 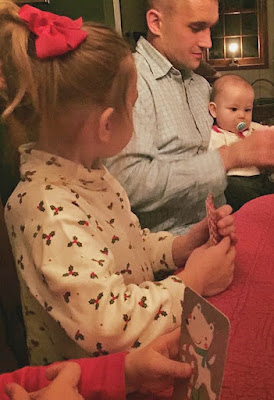 But no one came here just to eat. Family games were in order, and I had some cute ones planned. "Santa's Helpers" card game is played like "Old Maid," except you want to end up with the final "winner!" card. I snatched this up after I experienced a vivid flashback to days of playing the original version with my sisters. We competed with a vengeance. The "old maid" herself became so torn and bent that we subbed in "Cowboy Rex" as the "bad guy." I think, thankfully, those genes are regressive. Brielle graciously accepted victory after a final round show-down with Aunt Karen who "may have" requested a tip to ensure that outcome!

I'm so glad the daddies came. They enjoy every game right along with the kiddoes! 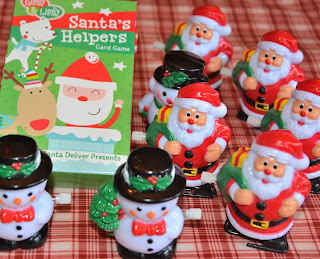 We raced wind-up Santa and snowman toys in a heat so chaotic that no one could be declared a clear winner. These little guys have a mind of their own when they're set loose on the kitchen table! Some perform well in a trial run, only to spin in circles and fall off the edge of the table when the going gets tough. Who knows what goes on inside those little plastic heads? Go figure!


Finally! Time to get to work. I hand out bakery boxes filled with a "grandma's dozen" (that's at least 16 - maybe more!) of pre-baked treats. Tied with giant, glittering bows, they glow from within on battery operated micro-mini lights. The effect, through clear plastic windows, is magical, and the kids cannot wait to begin. 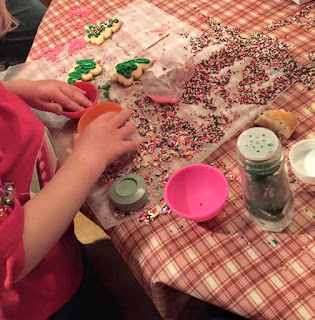 My second tip is to advise wise grandmas to pre-bake and just let the kids decorate. It's faster and less messy, although you'll never catch me saying "less wasteful!" 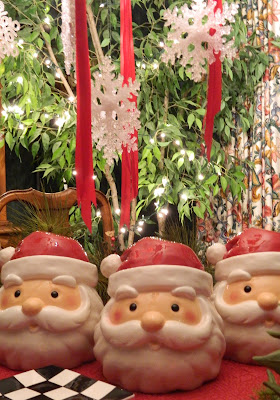 Our goal is to fill the Santa cookie jars I presented to each family several years ago. Each mommy also gets a chilled roll of red and white spiral cookies to slice and bake, and enough dough to make a dozen or so Christmas mice; those critters scurry about with peanut ears and red licorice tails to delight the kids! 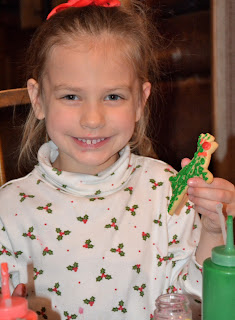 My third "wise grandma" tip is to serve Royal icing in plastic condiment bottles. You can make a variety of colors ahead and kids handle them easily.

Bree made this happy green reindeer just for me. Thank you, sweetie! xxxoooxxx 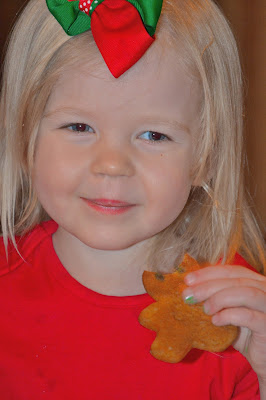 Kaylee inserts her own tip here. "Always taste what you make!" 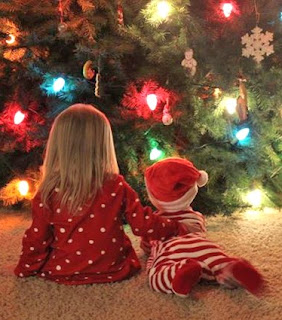 My final tip is to "be a grandma who hosts an annual Christmas cookie baking party!" Warm your kitchen with the presence of your favorite little ones, and the appreciation of their parents. Once you establish this tradition, your family will anxiously await it every year - right along with a visit from "you-know-who!"


None of the products I've mentioned here are sponsored ones. I just like to buy stuff and yap about it endlessly! The darling micro-mini "fairy" lights can can be found on Amazon, Martha Stewart's gourmet mac and cheese recipe (linked above) is "out of this world!" and the "Santa's Helpers" card game by "Gibby and Libby" can be found on the C.R. Gibson website. The 6" square bakery boxes are at Michael's and JoAnn's and easily fit "a grandma's dozen."
Grandchildren are neither "for sale," nor "on sale." And finally, if you ever spot me in the aisles of Trader Joe's, please - just don't get in my way! :)