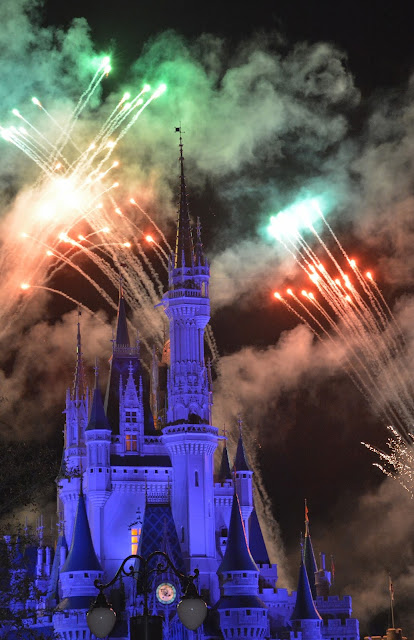 Disney paid for my family's trip to
Walt Disney World® Resort. As always, all opinions are my own.

Explosions of sound! Of light! Of color! Of dance! And song! The best magic of Walt Disney World® Resort comes alive on the streets and stages of its theatrical productions. And an even more heartwarming vision? The faces of your children and grandchildren, star struck with wonder as they gaze in awe at the spectacles before them!

Besides the stunning suitable-for-most-ages entertainment factor, I appreciated parades and shows for the opportunity to take a break from the brisk pace of each day. In vivid contrast to the energetic hustling bustle of each Walt Disney World® Resort Theme Park, indoor theaters are cool and dark - a great place for grandparents - and kids! - to refresh. 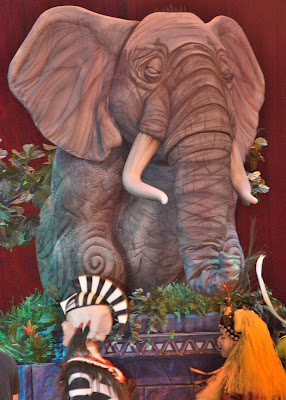 If you've only room for one show, allow me to suggest that it be Festival of the Lion King. This indoor, live stage performance features giant puppets, dancers, and acrobats plus familiar, beloved music of the original Disney movie. You'll find shows at Disney's Animal Kingdom® Theme Park. 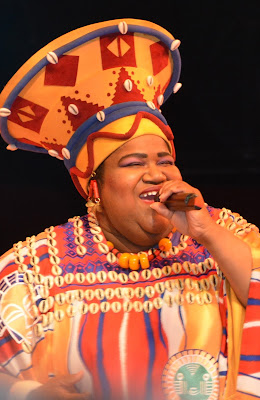 The production is striking in its beauty - of performers and costuming, vocals, and majestic animal puppets. I loved the dancers who gyrated agilely on stilts, the display of fire twirling and the constant presence and movement of eye-popping brilliance! 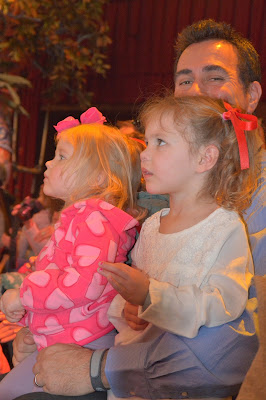 The "circle of life" is present not only on stage. Can any other scene warm a grandma's heart more fully than one like this?

Disney's Animal Kingdom® Theme Park is also home to the It's Tough to be a Bug® attraction. The theater setting for this 3-D film is deep below the roots of a tree. (Who but Disney could manage that?) I don't have photos because they're not allowed, so you'll have to use your imagination here. The glasses you'll wear bring everything to life. Bugs flit and flutter inches before your eyes. They peer down from openings in the ceiling. There's a huge scary one, a locust, I believe, who narrates on the stage, and he's not that friendly. Bugs are everywhere! And they're busy! And loud! When it turns completely dark, prepare to feel drops of moisture when you're "sprayed" with insect repellent. You'll smell a stink bug, too! It's intense. And wonderfully done. But is it for young kids? Possibly not. My seven year old grandsons loved it. Bree, at age five, was scared. Year old Austin burst into tears and mommy took him out. Cast members explain right from the beginning that the show may be too much for some little ones, and they make it easy to exit if that's the case with you. I'd definitely see this one again. With older kids. 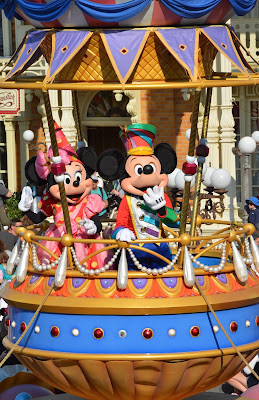 When the weather is picture-perfect, there's nothing like an outdoor show to revel in the sunny warmth of it. Magic Kingdom® Park is known for its iconic Festival of Fantasy Parade. This visual spectacular overwhelms Main Street. Grandchildren who are character fans will relish the way they just keep coming! Ariel! Mickey Mouse! Minnie Mouse! Peter Pan! The Seven Dwarfs! Fantastic color and sound. I'd say that it is, by far, the most energetic focal point in all four theme parks! 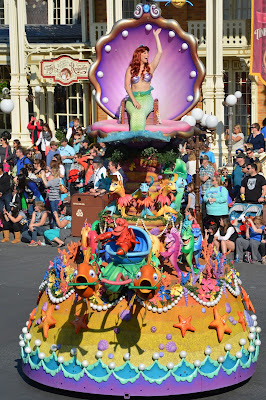 Here's what it feels like to be on Main Street at Walt Disney World® Resort!


And here's what it looks like when your grandchildren are enjoying the time of their lives - and you are there to witness it all!...... 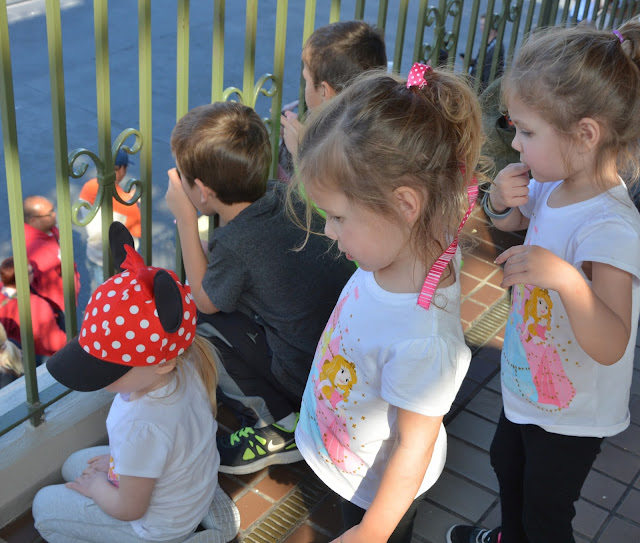 But how much do kids take home with them from a magical vacation at Walt Disney World® Resort? I didn't see the Voyage of The Little Mermaid show at Disney's Hollywood Studios®, but five year old Brielle did. After we arrived back home, my daughters and I exchanged a flurry of messages - our fondest and funniest moments and memories. I haven't changed many words in this email from Christy. Picture Bree performing as mommy narrates:

"It feels like I actually never left Walt Disney World® Resort. I would have sent a video of this show, but Bree gave us rules! NO flash photography! She wears her Little Mermaid costume, the play room is re-arranged, she's singing, and if she does not know the words she continues on with babble, but promptly tells us that it is actually Spanish. She claimed Austin (little brother) was Ursula, but then later he was the prince and Sneakers (cat) was Ursula. She had a fork out, combing her hair and labeled that the correct name - "dinglehopper." She pretended she was eating fish (?) and then the show went on and on and on and on and on and I suddenly realized that I had told her after "the show" she would need to go up for quiet time. So that might explain why it lasted 2 full hours! We ALL fell asleep after that." 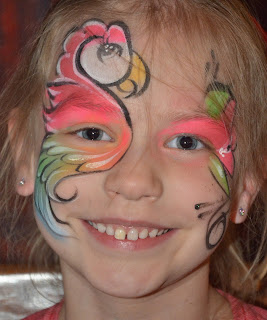 And here she is - grandma's own little mermaid/ actress/producer - "feathered up" as a parrot at Disney's Animal Kingdom® Theme Park! 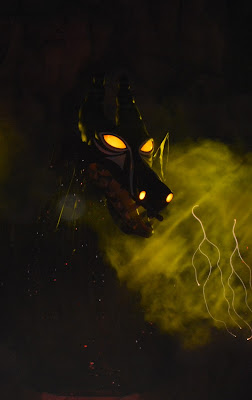 Fantasmic! is another outdoor venue performance that we enjoyed together - all sixteen of us. Mickey Mouse is the hero of this dramatic laser light and fireworks extravaganza that takes place after dark, on select days, weather permitting. But lots of villains show up before he triumphs - this fearsome dragon among them. I liked the slithery snake too! Catch this one at Disney's Hollywood Studios® . 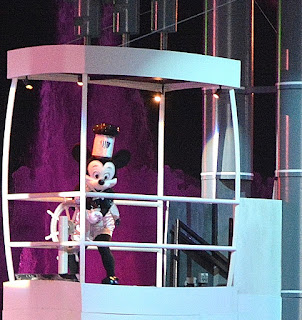 The show is smoke and fire and music and boats that round the bend loaded with favorite characters. All of them, I believe, aboard the steamboat that makes a concluding appearance. It's piloted by Mickey Mouse - the original "Steamboat Willie!" I wondered, the second I recognized that version of him, if anyone but grandparents would note that. And I wondered too, if somewhere, somehow Mister Walt Disney himself realizes today how much joy his creativity has brought to so many of us for so many years. I wonder if he knows that I join him in marveling how "it all began with a mouse!" 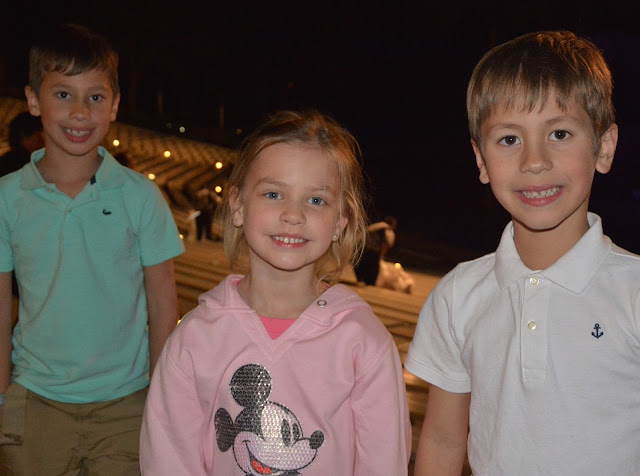 And, one more reminder! Be sure to enter the Better Homes and Gardens Magazine "Making Memories Magical" contest for a chance to win a multi-generational family trip for eight to Walt Disney World® Resort! Links and details right here!

This is a sponsored post written by me on behalf of Better Homes and Gardens and Walt Disney World® Resort.
Posted by J at 6:05 PM