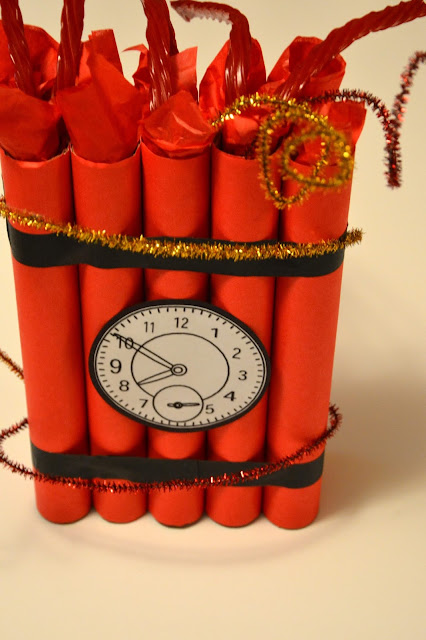 My grandkids are seasoned problem solvers. Since they could toddle, they've nosed out secret stashes of birthday gifts and flushed worried cats from under-the-couch security. Hide something waaaay up high on a shelf, and you'd find them perched on the edge of a chair, pointing upward, asking, "What is that, grandma? Are you hiding stuff from us again?"

It was time to send them on a deliberate adventure - one where inquisitive eyes and noses-for-the-news could be put to the test. It was time to enlist "the big kid trio" at Grandma Camp as secret crime solving agents so I could sit back and encourage a delve into the mysterious nooks and crannies of my house! I'd give them an ultimatum, too. If they were unsuccessful in their mission, they were likely to be blown sky high right along with a candy-thieving perp's home made bomb!

Secret Agent adventures are a popular party topic, and Pinterest boards bulge with ideas. It seems that moms and grandmas share freely with one another, tweaking for the best personal experience. That's what I did, finding sources that I deemed "good" and "better," but settling for only "the best!" I recommend two of the latter. And here they are!....

One Creative Mommy blog - This resource is a treasure trove of detailed ideas - the one I relied on almost exclusively to produce a problem-free experience. Heidi (an elementary teacher and mom of two) owns the organizational skills you'd expect from an educator. She's generous, too. Her printables are top quality and she offers them free of charge. This site is a "must-visit" for invitations, badges, code names, spy agent training, a very clever bomb pinata, and exciting clues galore. I'll reference this source frequently in my post.

Shhh! Do you hear the sinister tick-tick-ticking of a time bomb? I do!
Let's go see what's up! 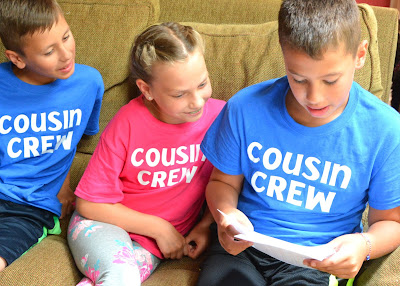 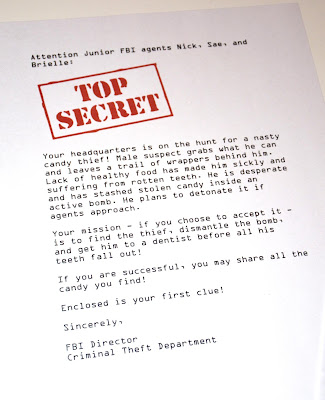 
Here it is! Ooooo sounds dangerous!

Accompanying that letter was Heidi's "stretched word" clue. I appreciated the "print-and-go" convenience of this one. It was quickly deciphered to read "fridge" - something everybody's got at hand!

Inside the fridge, the kids snatched up a "Mirror Clue." I printed Heidi's directive to "reflect on this message" along with my own advisory: 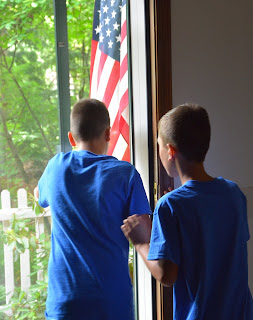 When the doorbell rings,
and the dog starts to bark,
you reach for the handle
and open -- -- 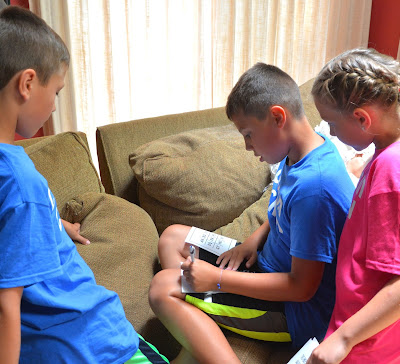 Taped to the front porch was a "Mason Clue." I found this one fascinating! Never heard of it before! The kids dove right in to solving it, taking turns at being lead investigator.


And what did it say? "Look behind the garage!" With a mighty whoosh! and a race to the door, the trio was GONE! - headed out to collect clue number four!

This was also grandpa's signal to set up the next event! He dutifully dumped inflated, clue-filled black balloons (bombs!) on the family room floor. 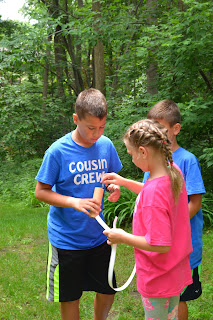 But meanwhile, back behind the garage......

Junior agents puzzled over a "Scytale Clue." Yes, I know. That one was new to me, too! Let Heidi guide you through it right here.

"Family Room!" After a few moments of team work, Scytale letters spelled out that simple prompt. Once again, with a vigorous shout of enthusiasm, campers scattered in a flash, breaking for back inside the house, triggering a heart-bursting moment of joy for grandma. Campers were really, really, REALLY enjoying themselves, and I was so proud of myself for putting it all together for them. 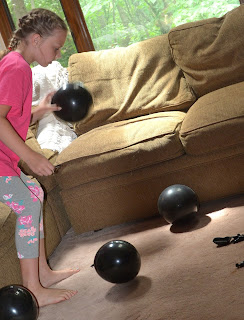 I hurried along behind to deliver instructions for what was ahead. Junior agents were to break the bombs by any means possible, watching for individual parts of a clue to pop out of select ones. All needed to be broken - and this time grandma sighed in gratitude for the $1.59 Hobby Lobby 24 pack of black 12 inchers!

Excitement spiked when words on paper strips appeared. Bent studiously over the collection, agents shuffled them a bit, consulted in brief, and sprang for the stairs when "Where are the tents?" emerged. That targeted campers' sleeping area, and moved detectives out of the way so the stage could be set for the final confrontation with our bomb-bearing candy thief! 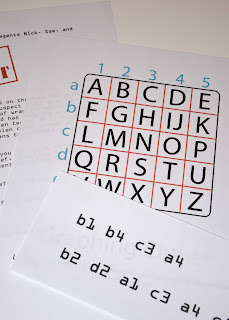 Upstairs, our spy trio clustered about a "Substitution Code Clue." Expert de-coders by now, it didn't take long to decipher "Find Grandpa!" on the grid.

Kids raced back down. "Where is he? What does he have for us?" How could this benevolent soul figure into the mystery we've been charged with solving? 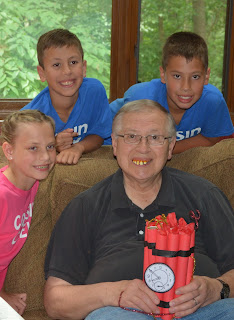 But there he was - with a mouth full of rotten teeth that removed all doubt over his criminal identity!

(If you think the kids look a bit apprehensive over his appearance, you'd be correct! The grandpa they're used to is one who brushes his teeth and doesn't wear a goofy fake set just for fun!) 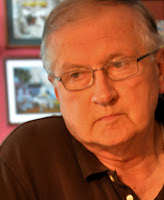 Here he is on an ordinary day - at the pensive moment he's just learned he'll be the star player in our rotten-toothed candy thief escapade! (He sighs, knowing very well no argument will get him out of this gig!)

So, our junior FBI agents recovered quickly from their initial shock and tore the bomb to pieces just in time. They devoured the "fuses" (Twizzlers) and divided the "sticks of dynamite" (cardboard tubes) stuffed with candy. The cats carted off attached "detonation wires" (sparkly pipe cleaners), and grandpa promised he'd ditch the crazy teeth and revert to his law abiding ways, requiring me to resume shoo-ing the ladies away from handsome-him at the grocery store!

And grandma? Well, she's just content to have this long-wished-for adventure checked off her "to-do-with-grandkids" list - and heartily grateful to Heidi and Grandma Shelley for their creativity, inspiration, and generosity! 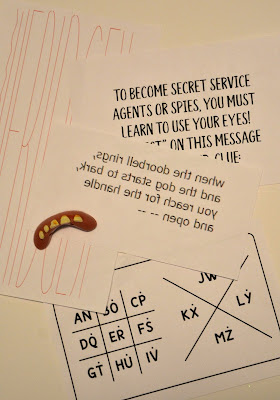 Pictured at right are goofy fake teeth, and clues and codes available at One Creative Mommy.
Posted by J at 9:28 AM