Veterans Day: "I know what it feels like to be hunted." 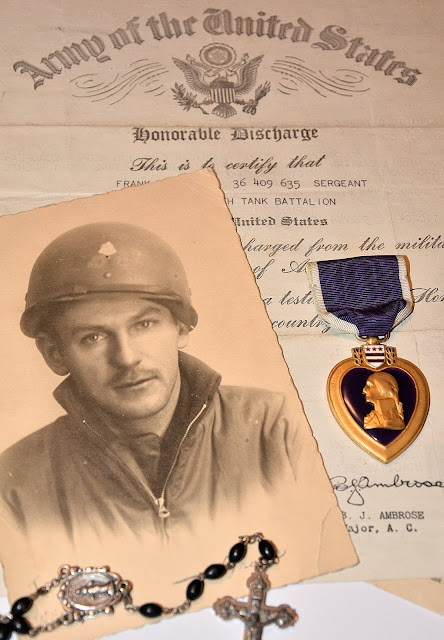 This one is for me. And my family. And for those of you who were born of a veteran, or loved one, served as one, or simply appreciate what they have done for us.

My father, Frank, was an army veteran of World War II. I have his draft notice to prove it. And his Purple Heart, his Honorable Discharge certificate, and the black rosary mother prayed daily for his safe return. Beyond those mementos there's not much more I can tell you. Dad never, ever spoke of his experiences, and I never asked him about them. What little I do know was relayed to me in bits and pieces by mother:

My father was a tank commander, bonded to four younger charges who affectionately called him "dad." ("Dad" was 26 years old at the time.) When that tank was hit by enemy fire in Germany, everyone but he - mercifully blown from the vehicle - perished. I'm not sure if it was that incident or another of two "wounded in action" citations listed on his Record and Report of Separation that merited him his Purple Heart award.

Dad and his fellow soldiers knew "something big" was coming when those with fathers who were "somebody" were abruptly culled from infantry. Dad wasn't one of them. He was deployed to Normandy Beach the day after D-Day. What he witnessed there was never shared, guarded fiercely for his lifetime, even from mother.

Dad was part of a convoy that rumbled through European death camps after they were liberated. He humbly absorbed the adulation bestowed upon that population's heroic savior: the American soldier. I wonder if that's when dad picked up the German medal now also in my possession. The one I stiffen and recoil from at the sight of the ugly symbol it bears, the one suggestive of the very worst of four letter words ever uttered: Nazi. At one time I researched this medal. If it had value, I'd seek to sell it to get it out of my sight. But it is a common one: a German Mother's Cross. The word "mother" in its title softens me, so I force myself to make allowances for it. This token was once borne, perhaps unwittingly, by someone who contributed an acceptable number of "genetically superior" children to her country. One who secretly may not have embraced the nasty ideology of its regime. Possibly one with a son conscripted to serve, not because he wanted to, but because he had to - like my father....

.....who gratefully returned home at war's end to put down his weapon and never again take up another. Not even for sport. "Because," he explained to mother, "I know what it feels like to be hunted."

Mom and dad were married and had their firstborn child (me). My father's reaction to the birth of his daughter? "Good. She will never have to go to war like I did."

He was right, of course. The flailing tentacles of Vietnam snatched friends from me named Jerry, Don, and Dan. And it was the faces of my male classmates that I dared not seek out on the night we gathered at the campus radio station to hear the birth date roll that would draft more of them from my midst. Those years, a tumultuous time of anxiety, anger, activism, and rebellion set the stage for reemergence of this salient question: "What if they gave a war and nobody came?" Let that settle for a moment. Do you ever wish that, from now on, it was our reality?