Long ago, I read an anonymous quote in an old cookbook: "It matters less what is on the table than what is on the seats!" I certainly do agree with that charming sentiment, but last night I think I managed to fill both the table and the seats with a wonderful bounty of heartwarming Christmas spirit!

My entire house lights up when all three grandchildren burst inside of it, full of laughter, excitement, and anticipation over what Grandma has in store for them this time! I hoped to set a stage of warmth, togetherness and joy for them, their moms, and Aunt Karen, too. Quite honestly, I think I succeeded very nicely at the task!

We began with drinks from the "Magic Snowman" decanter! The boys were amazed to see their clear cups of Sprite turn color - one to red and one to green - when the beverage interacted with a drop of food color hiding beneath an ice cube. It was actually pretty magical - even to me! Imagine how much fun this would be at a birthday party where each child came away with a different color in his cup!

I loved the way the Santa face mini pizzas turned out and so did the kids. I used an English muffin base, spread prepared pizza sauce over the top, placed small black olive slices for eyes, a tiny grape tomato for nose and a thin piece of red pepper for hat. Shredded mozzarella cheese covered the sauce. I baked them at 350 degrees for 10 minutes. As soon as they came out of the oven I "fluffed up" the beards with another sprinkling of cheese. Nothing got distorted during the baking process.

Not everything was a success, though! I covered the top of my quiche with 2" cookie cutter Swiss cheese stars and it came out of the oven looking like it was coated with mold! The star studded leafy salad, however, looked terrific! Cheese stars mingled with star shaped oven baked croutons (cut from dense white bread, toss in melted butter, bake 350 degrees for 10 minutes or until golden) looked fabulous. Snowflakes would be pretty, too!

﻿After we ate it was time to bake! Out came the rolling pins, sugar cookie dough (pre-made a few days previous) and loads and loads of sprinkles! The kids got right down to business - even Brielle, who is only fifteen months old!

One thing I will do differently next year is to have one sheet of cookies already baked so the kids can get right into frosting and decorating. They do like to roll and cut them out, but the ten minute baking time is a long interval for kids this age to endure. We did, however, fill that time slot nicely with "sprinkle-eating!"

"Less is More!".....ummm, REALLY? Well, not over here! Not at Grandma's Annual Christmas Cookie Baking Party, that's for sure! I bought a few sheets of those little icing eyes, thinking (naively!) that they would be a nice touch on the faces of snowman or reindeer cookies. The boys took up the challenge and teamed up to make a pair of what we could only describe as "Christmas Aliens!" Now this is creativity at its very, very best, don't you agree?

﻿﻿After the final batch of cookies was safely packed up to take home to daddy in pint size Chinese take-out boxes, we plopped on Santa hats and made ourselves fluffy white mini-marshmallow beards! Simply adhere the marshmallows with a nice slathering of gooey peanut butter on your cute little chinny-chin-chin! It helps to have a "busy body" little girl cousin take over and do the work for you! 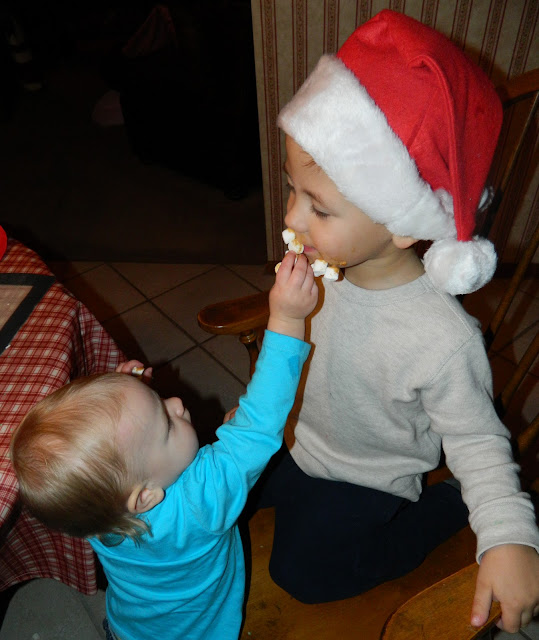 The final event of the evening was the awarding of "door prizes!" Each of the kiddies randomly chose a winner's name and handed out the prize. Mary Jo and Christy won the framed Christmas tree prints made from the little feet of their children. Karen won the framed print of the three little "snow-cousins."

Now, I am not saying that some cookies didn't go into the oven as thin as a sheet of paper while one right next to them might have been as thick and hefty as an industrial weight sledge hammer...or that the cats aren't walking around this morning with tails studded in festive sprinkles...or that multiple wads of dried cookie dough aren't populating beneath my kitchen table...or that every doorknob in the house isn't sticky with green or red icing...or that my "lost and found" box doesn't bulge with a little pink hair bow, a plastic booster seat and a GAP sweatshirt in a size that no one who lives here now has fit for over sixty years! No, I am not saying that!

What I am saying is that the twins each exclaimed,"I had FUN!" on the way home, and that the girls each called or emailed today to thank me again for the wonderful experience and to say how much the daddies loved the cookies! I am saying that when I sweep and scour this morning I have a smile on my face because the precious memories of last night remain vivid in mind and are the reason there will be a "Grandma's 3rd Annual Christmas Cookie Baking Party"...and a 4th....and a 5th...and a 6th...and on and on until this grandma becomes too "ditzy" to properly mix the green icing sported by the multiple-eyed "Christmas Aliens" who are born on my kitchen table every year at this time!