If You Eat Our Pumpkins, We Are Gonna Eat YOU! 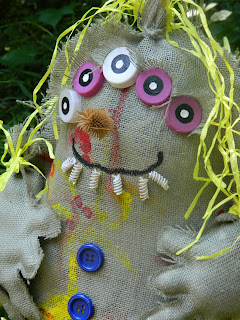 "What on earth is THAT?" you ask. Well, I don't blame you! And I will get to a suitable explanation in a minute. But first, bear with me as I divulge my "pre-becoming-a-grandma" vision of gardening with my grandchildren - one that is quite a bit different from today's reality!

In former dreams, those longed-for children and I would frolic merrily through weedless, verdant acres of plump ripe berries and corn husks so tall and healthy that we could carve with ease our own haunted Halloween maze each year. Exotic varieties, such as spaghetti gourds, would thrive so eagerly that they would brazenly climb the front steps, enter the house, and lay a carpet of fertile blossoms upon the living room couch! Whatever we liked we planted, and it grew with reckless abandon because it was always very anxious to please us!

This fantasy garden, my picture-perfect plat of symmetrical artistry, begged earnestly for protection and that came in the form of an entire extended family of scarecrows - ones that held hands across ripened rows and were fashioned to resemble each one of us - all three generations! Their attire was traditional preppy-scarecrow - denim overalls, crisply pressed plaid shirts and wide brimmed straw hats shading jaunty, toothless smiles that grinned beneath thatches of straw hair. For a final whimsical touch, grandma would perch life sized fake crows on each shoulder and those birds would attract curious live ones who would smile at the irony, respectfully refusing to eat our produce. They would instead confine themselves to the bounty of a mischievous cat-shaped feeding station that we ourselves hand fashioned from sun-baked clay and replenished daily with premium seed also grown and harvested by hand. Whew! That's some tough wheelbarrow to fill, huh?

My reality is a scratch of a dirt patch, roughly 18" x 36," where six undersized pumpkin plants struggle to touch the sun. I stand over them numerous times each day to wring my hands and debate the ethics of sneaking in "otherwhere grown" pumpkins next fall amid these scrawny leaves so the grandkids won't be disappointed when the gigantic fruit that grandma has promised never materializes.

And the agony doesn't stop there! Last week I gathered the kids to tutor the topic of scarecrows. At least we'd have those, I thought, and a really, really cute American traditional family of them would attract such acclaim that the absence of robust vining curled about their feet would go unnoticed! I'd looked and looked for a charming folk tale to accompany my lesson in "scarecrowology" but alas, with the notable exception of the Wizard of Oz, no such animal exists! I was on my own, relying on pictures from worn pages of an old, old Country Living magazine for explanation and visual stimulation.

One of many, many things I love about the boys is that they will never hurt my feelings by saying, "Grandma, that is a goofy idea," even though sometimes I can clearly read that very sentiment in their eyes. This time, they glanced at each other uneasily and then the braver of the two declared, "Grandma, those scarecrows are not gonna scare anybody away from anything. What we need out there is a scare-MONSTER! - a green one! with lots of eyes...and big, big hands!" At that moment, the brutal truth stared me boldly in the face. I am never going to have my rolling acres of perfectly planted heaven and I am never going to have my primly groomed three-generation scarecrow family sporting plastic crows on straw-stuffed shoulders. I am simply going to have to settle for two happy little boys working side by side with me to make the best-ever green, multi-eyed, extra-large-handed scare-MONSTER anybody ever saw! And if he doesn't end up looking like something that would say, "If you eat our pumpkins, we are gonna eat YOU!" well, I don't know what would! 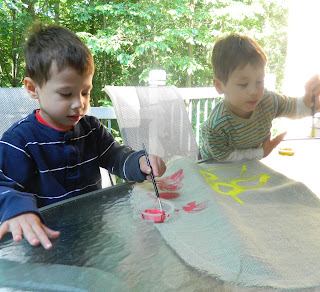 The boys chose red and yellow paint to decorate the scare-monster, made from a "blob shape" traced and sewn on a folded yard of green burlap. They stuffed him really well with plastic shopping bags. (I also discovered that this is a very handy way to dispose of the dilemma created when grandpa persistently asks, "Why do we always have so many bags from Michael's and Hobby Lobby?") 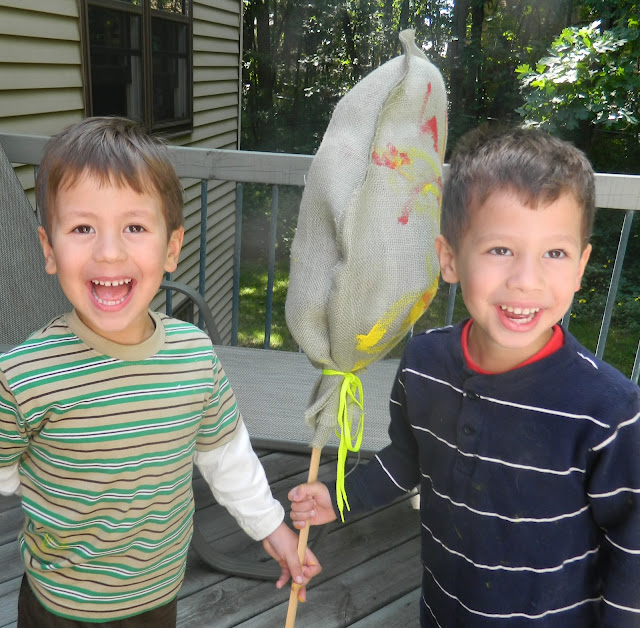 I poked in a stick about 4' tall and tied up the open bottom with an old shoelace. At this point, we brainstormed the way our scare-monster would look when he was finished. The boys gave the orders and grandma wrote them down. It was my job to complete the project alone. Five eyes, I was told - FIVE! (milk bottle caps), a pointy nose (dried teasel), sharp teeth! (rotini pasta painted white), blue buttons! (blue buttons) and of course, the aforementioned BIG HANDS! Reallly BIG hands!" As further proof that these two are such very nice little boys, I will mention that their original order called for blue hair and LOTS of it. I must have slumped in my chair a little then, thinking longingly of the bright yellow raffia strands I could pluck from a long discarded luau party skirt (not mine!) that still lurked in the basement. "Ohhh, but what about YELLOW hair?" I asked in a spooky, menacing tone of voice. SOLD! Immediately! See what considerate little boys they are?

And so, to answer your question, "What on earth is THAT?" may I present our home made scare-MONSTER, custom designed to grace a scrappy little garden plat that has somehow managed to exceed my dreams of unrealistic perfection, even as it has scared them all away!