Welcome back to our zany nest of snakes! The colorful ones we crafted last week have snuggled in to hibernate, allowing us to focus attention elsewhere. Day two of the snake festival grandma is hosting for her little charmers moves on to a home crafted lunch and a mixed media art project.

Let's eat first!
﻿﻿﻿﻿﻿
I'll just pretend I didn't see images of grilled snakes artistically skewered and sold to nonchalant munchers in the marketplaces of Beijing. Stumbled upon those accidentally while making sure that my puff pastry dough idea really was the easiest one out there. We sliced a sheet into horizontal thirds and the kids rolled them into tubes, customized as our favorite - non-poisonous, friendly, egg-eating milk snakes! * These were perfect for two and four year old kids to craft because they went together so easily, baking for a quick 10 minutes.


* Not to be confused with the nearly identical - but deadly poisonous coral snake! Yikes! Shoo! Go 'way!﻿
﻿

Quite frankly, I didn't expect the bread stick part of our salad to be so realistic! Very glad when my culinary snake-eating experience ended and it was time to get "artsy" again....an area I'm much more comfortable in! 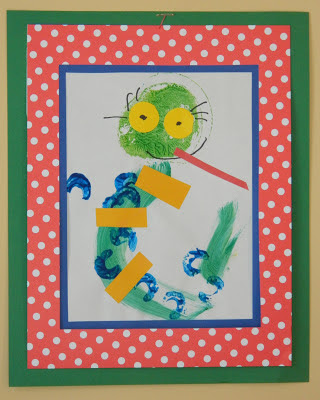 Our fanciful reptiles were rendered in tempera and paper. They combined the arts of vegetable printing, painting, drawing, and collage.


Here's Bree to demonstrate how she swooped her foam brush below a potato printed head to make a sleek body for her snake. Scales were added with the end of a celery stick. One of the trio she made sported orange eyes, punched from paper by the artist herself and then firmly glued on, along with a handful of body stripes and a long red tongue. Each snake also received a freehand smiling face and a pupil and lashes for each eye. 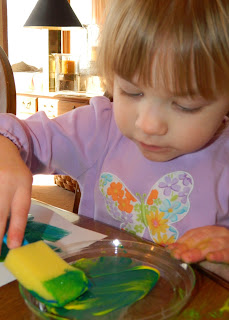 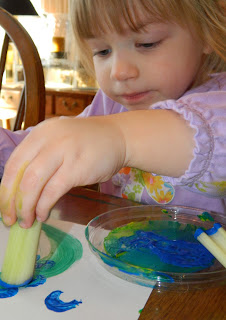 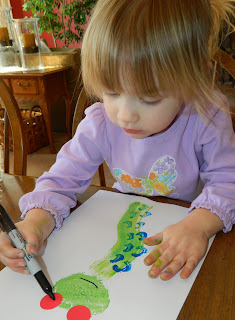 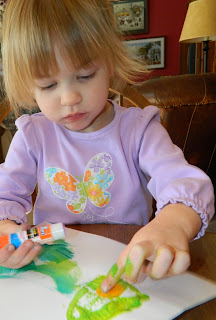 Where have I been living? Under a rock? * Our snake festival was well underway by the time I was made aware that 2013 celebrates the Chinese Year of the Snake. That means that an event like this one is instructive in both biology and social studies. If you're on the prowl for fun snake-making activities, check out this post written by Diana Rambles. She's gathered a delightful nest of New Year ideas and traditions to honor her daughter's native heritage. There's something blinking in the sun and lurking in the weeds over there for everybody!

* Those who actually live under rocks might find themselves jostling for space with a harmless worm snake - native to the United States. I didn't know that before! Seriously, grandmas - if you've been intimidated by the way I've been rattling off authoritative snake facts lately, throw yourself a festival like this one! You will be surprised at what you'll absorb alongside the wriggling co-celebrators who join you!
Posted by J at 7:25 AM