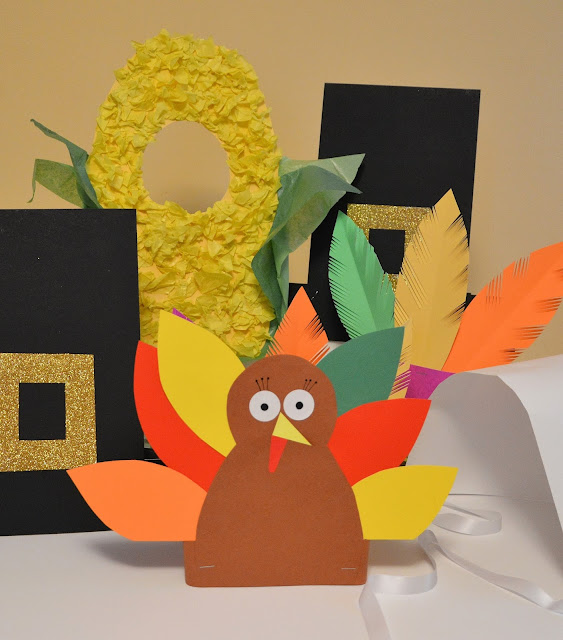 The kids don't know it yet, but they're going to superstar in a post-dinner Thanksgiving play at grandma's this year. Considering their love of theatrics, I'm confident they'll gobble up this opportunity right along with savory sweet potatoes served on the rapidly approaching family day of thankful feasting.

A Cast of Cousins

Age level consideration is the most challenging part of writing a play that includes everyone. My eight active participants (infants #9 and #10 will be sitting this one out!) range from seven and nine year old Pilgrims confidently spouting terms like "religious freedom" and "Wampanoag Indians," to a trio of four year old Native Americans requiring prompting on lines as simple as "Here! Have some turkey!" Our remaining cast members (two year old boys) will find themselves described on the playbill as "Turkey 1" and "Turkey 2" and "Ear of Corn 1" and "Ear of Corn 2!" A goofy string of gobbling or total vegetable silence is all I'll require of that lively pair! 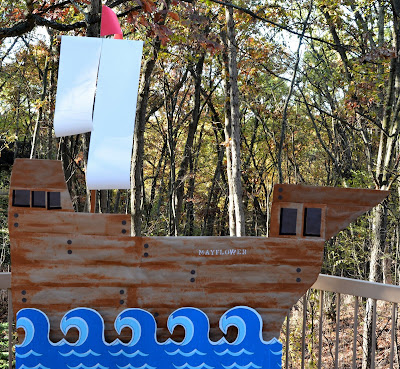 My majestic Mayflower, lightweight and two-dimensional, glides on stage in Act 1, Scene 2 propelled by a boarded trio of Pilgrims. It's six feet wide, cut from a decorated cardboard box. Paper sails with flag glued to a wood stick mast complete an impressive six foot height.

Ready to go? We are!

This three act play is for young children. It captures the general idea of the first Thanksgiving. Add or adjust historic details depending on ages/size of your cast. I purposely included points that will become answers to the Thanksgiving Trivia game that follows the play. This time, kids will be asking questions to determine if their parents were paying attention! Every correct answer earns a sticker token; winner holds most of them at game's conclusion! See suggested questions after the play script.

Three Indian squaws sit together at stage side....

Indian #1 - (gestures outwardly) "We have lots of corn this year!"
Indian #2 - "We are really good at growing things."
Indian #3 - "We know how to make delicious food and save it for winter so we won't be hungry when it's cold."

Pilgrim #1 - "Hello people! We have sailed from England and have been on this ship, the Mayflower, for 66 days."
Pilgrim #2 - "We are seeking a better life in a place where we can find religious freedom."
Pilgrim #3 - "I am so glad to see land. We have traveled 3,000 miles with men, women, and children and some animals, too."
Pilgrim #1 - "It was a difficult trip. We began with 102 people and one sailor died. The good news is that a baby boy was born during our journey."
Pilgrim #2 - "We have had sickness and death on our long time at sea. There were some fierce storms, too. We have only a limited amount of food left, mostly dried meat and beans."
Pilgrim #3 - "These people look kind and friendly and well fed. Maybe they can help us get settled in this new land."

Indian #1 - "You people look hungry and tired."
Indian #2 - "We have lots of good food and nice wigwams to live in."
Indian #3 - "We take care of the land and use only what we need. If you are going to live here, we will help you do the same"

All Pilgrims - "THANK YOU!"

Pilgrim #1 - "We would like your help. This land is new to us and we will need many things to survive."
Pilgrim #2 - "Besides food, we will need houses. I am glad there are many trees here for us to cut down and use."
Pilgrim #3 - "It will be up to the women to cook while the men are building. What kind of food do you have here?"

Pilgrims line up to narrate.

Pilgrim #1 - "After a first very hard and cold winter, thanks to the Wampanoag Indians, many Pilgrims survived."
Pilgrim #2 - "The Indians taught us to grow squash, cranberries, and corn, and hunt for deer and turkeys."
Pilgrim #3 - "We learned how to make canoes from trees and fish like the Indians do."

Pilgrim #1 - "Would you Indians like to come and feast with us?"
Pilgrim #2 - "The five women left in our colony would be happy to prepare a delicious meal for all of us to share."
Pilgrim #3 - "We would like to celebrate your kindness and our thankfulness. We will serve meat, pumpkin, corn, squash, and other delicious food.

Entire cast is sitting on a blanket, passing plates and gesturing eating.

Performance concludes with a lineup of cast who take gracious bows after individual introductions amid wild applause! GREAT JOB, Director Grandma! You take a bow, too!

Are you like us? We're just getting started after a production like this! Our audience always wants more, more, MORE!!!!! And so we give it to them! Here are a few ideas:

COMEDY SHOW - Every family has its own perfect candidates who'd be naturals at regaling the crowd with cute Thanksgiving jokes. You'll find 20 of them here, at Lisa's Grandma's Briefs blog. If you get there quickly enough, you won't be stumped when you're asked, "What always comes at the end of Thanksgiving, Grandma?"....(trot right over to find the answer!)

SPELLING GOBBLE (same as a "spelling bee" but, well..."Thanksgiving!" - and besides, it's November! Bees have long left Plymouth, Massachusetts for the winter!) It's not hard to come up with a list of words that keep kids as young as six in the competition. But if you detect anxious glances at televised football from daddies and grandpa, just toss in words like "Wampanoag" and "Massachusetts" to knock 'em out early and send 'em (thankfully!) on their way!

THANKSGIVING TRIVIA - My three oldest grandchildren read well and will ask the following questions. Were parents paying attention to the play, where some answers were hidden? Hmmm.....this is how we find out!