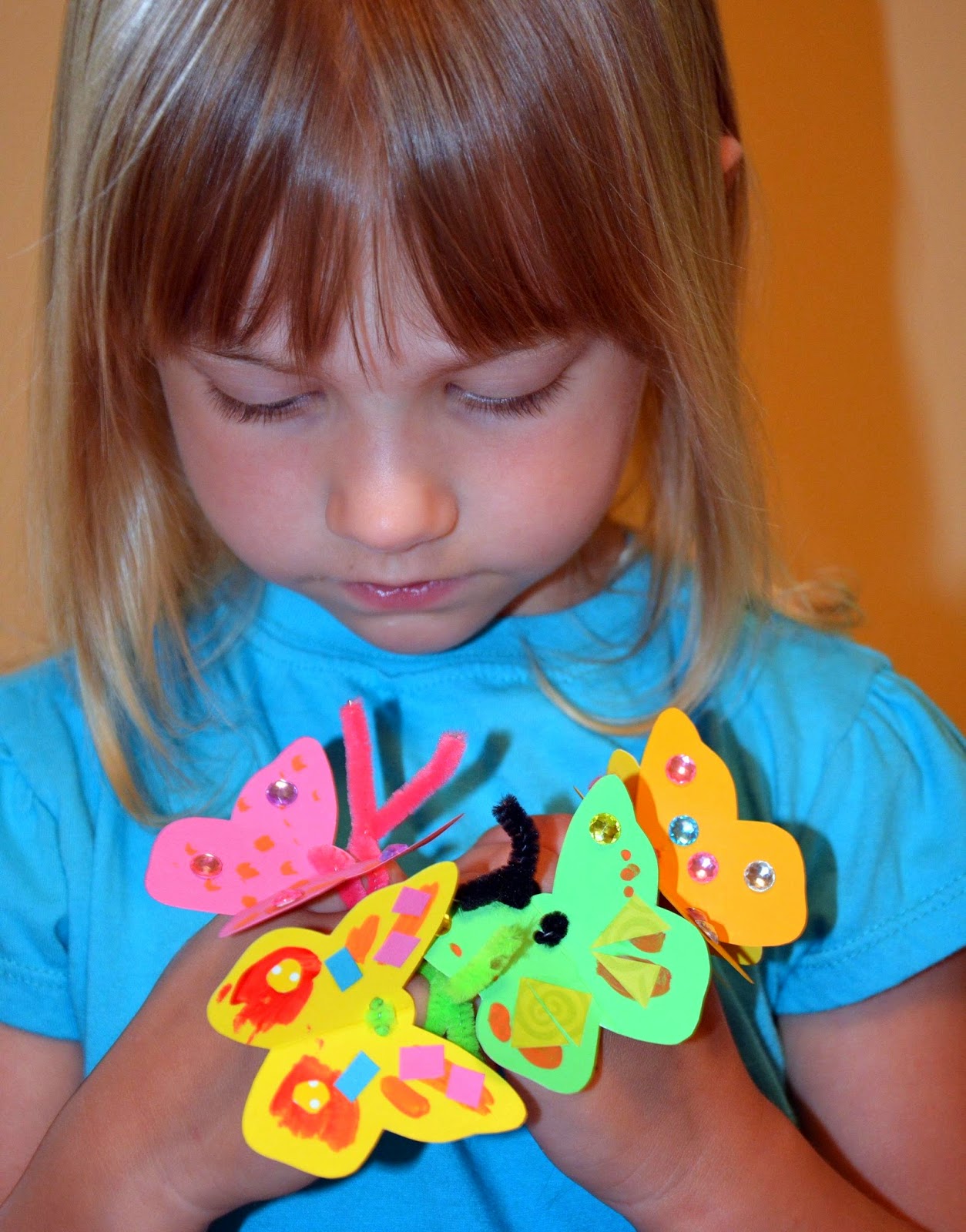 I wouldn't be surprised if Pinterest was aflutter with variations of this idea. I haven't had a moment to do the research. But I do know that I personally hatched this design during the years my daughters were in junior high - well before Pinterest existed!

An energetic and creative teacher had launched an Earth Day celebration, pairing eighth graders with students from the elementary building on the same campus. Second graders were both informed and entertained with projects and skits that promoted recycling and respect for the planet. I received a plea for a quick and easy craft idea suitable for little girls. With limited time and resources, I punched out dozens of butterflies from the school's die cut machine and bought every single "pipe cleaner" in town.

When I returned to my volunteer position after lunch, I was greeted with an eye popping ocean of brightly colored wings, fluttering and filling the bustling hallways. My butterfly rings had taken off, so to speak, and the fingertips of every female in the building sported not just one, but several of them! Apparently I'd hit on a statement that transcended a sizable age gap. Eighth graders were not too cool to wear an item designed for seven year old girls. I'm not sure if any educational value was realized from that day's fashion frenzy, but it sure felt great to float about school feeling like Queen Mother Butterfly!

Bree and I made these the other day and she was just as excited about them as I was. She's nearly four, so I cut the paper shapes before she arrived. Here's how to go "Butterflying" with your own granddaughter: 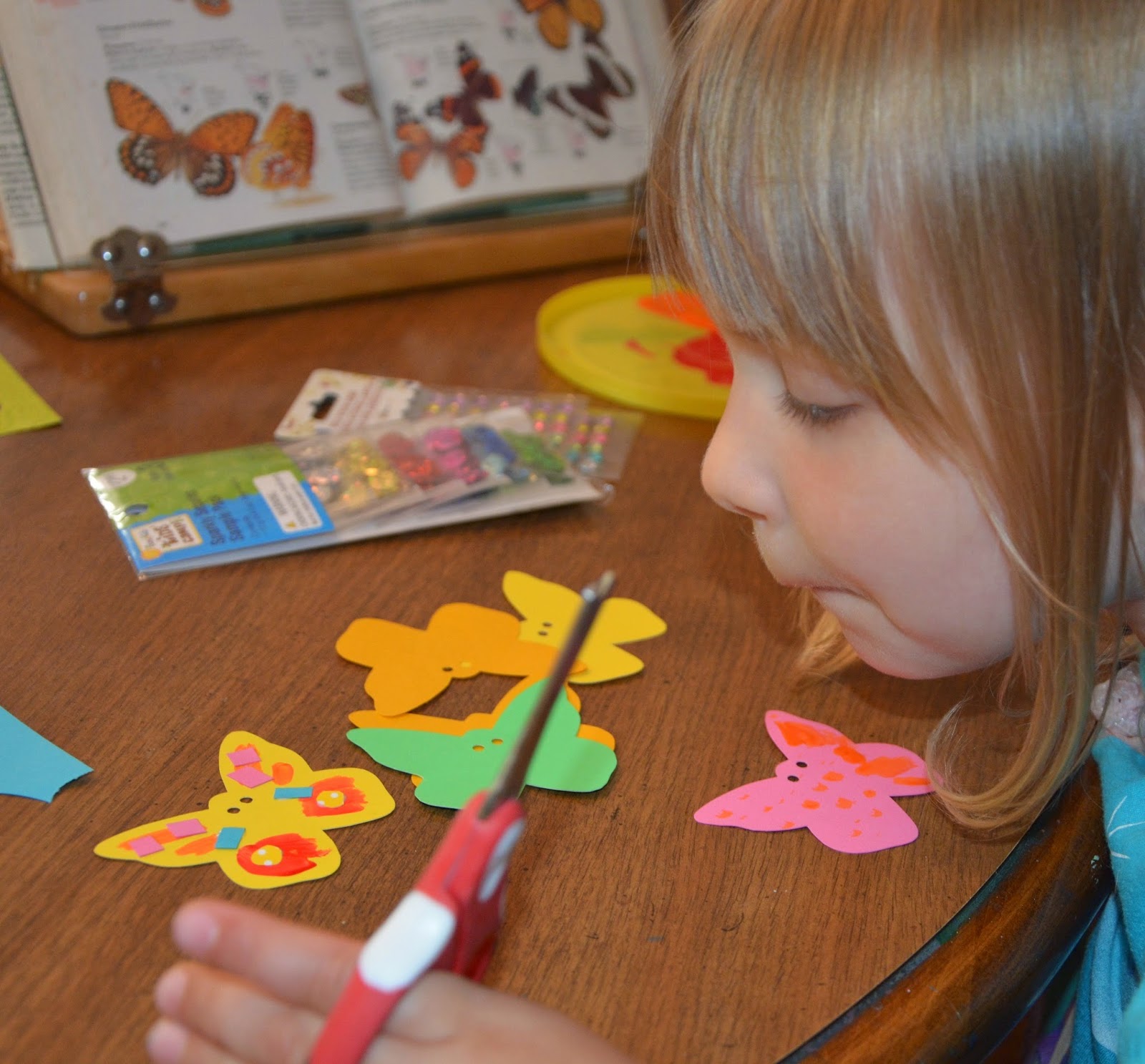 1. Use this template to cut butterflies from pretty colors of sturdy paper.
2. Punch a pair of small holes in each, as shown. Use a smaller-than-standard hole punch (1/8"), otherwise just poke with a pencil point.
3. Provide art supplies for decoration:
tempera paint, paper scraps and scissors, sequins and stick-on jewels.
4. Once decorated, fold butterflies in half, vertically down center.
5. Fold a 6" length of pipe cleaner in half and poke each end into a hole with butterfly facing up. Pull ends down.
6. Lay butterfly on top of child's finger, centered. Crisscross ends of pipe cleaner around finger, then pull up on either side.
7. Twist ends together to make antennae.

Before we began, Bree and I looked over pages in our invaluable North American Wildlife Guide (see page 8). Our finished projects were pure fantasy, but we noted the shape of wings and differences between moths and butterflies. I also took the opportunity to introduce symmetrical balance here, although my tutorial was rewarded with a "how-about-less-art-teacher-and-more-grandma" look! But I did secretly admire this little lady's mastery of small motor skills as she cheerfully cut, pasted and painted a handful of summertime fun, reluctantly agreeing to pry them off only at bedtime. That task, however, was mommy's job - grandma just does the fun stuff!
Posted by J at 5:57 AM