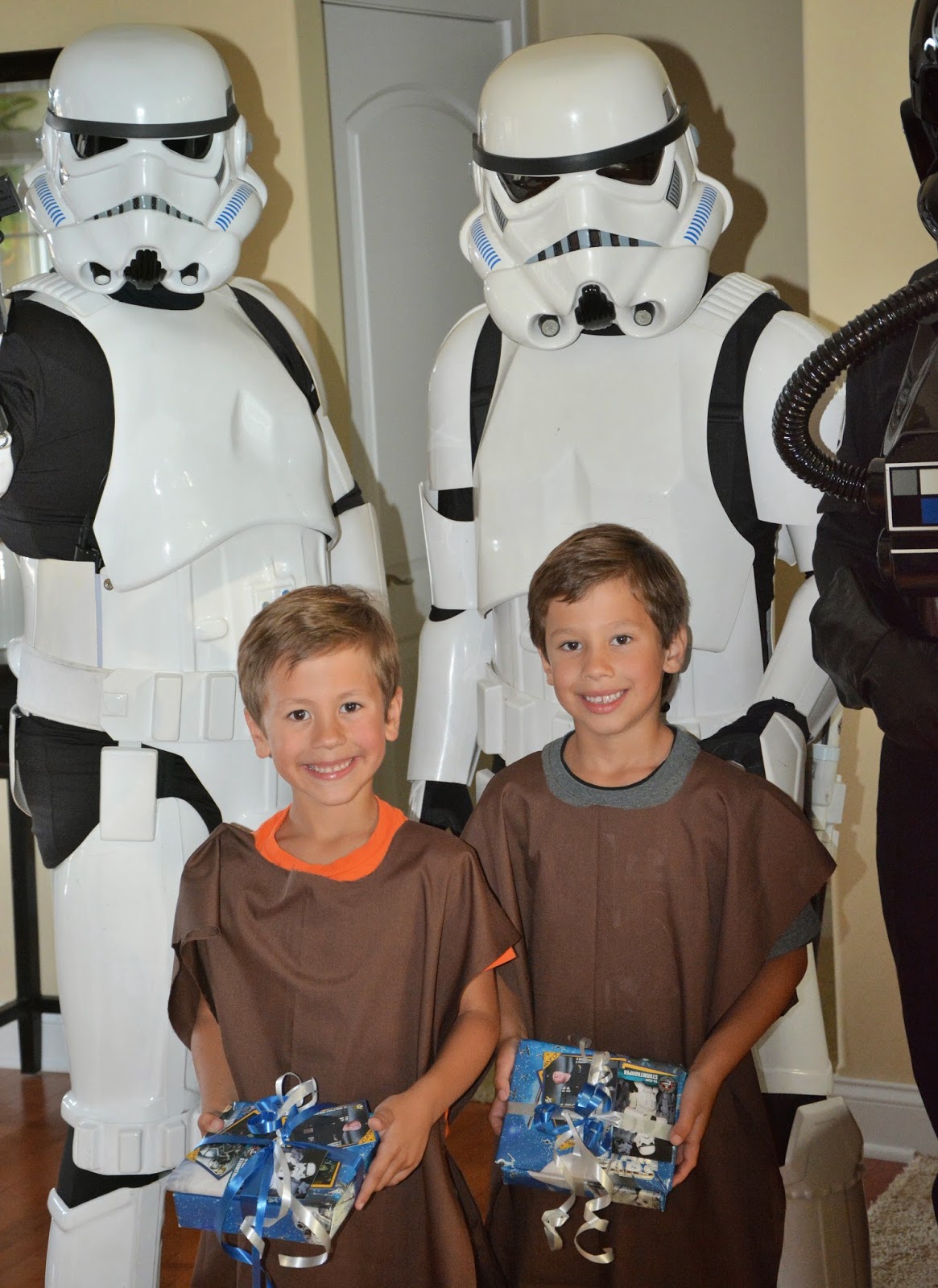 The best imaginative adventures of my life have been led by my six year old twin grandsons. Those delightful little boys introduced me to triple-eyed mega-monsters "for sure" hiding behind closet doors, ravenous dinosaurs crouching menacingly in the woods and pirates "yo-ho-ho-ing" in caves of plush pillows and couch cushions. I've been invited to flourish the flag at roaring driveway race tracks and encouraged to "spy" on newspaper-reading grandpa with rear vision secret agent sunglasses.

Currently, we've embarked upon the farthest reaching, most exhilarating journey yet. We're off to "a galaxy far, far away!" - home to the infamous Darth Vader and a colony of cuddly 'n cute, fuzzy-faced Ewoks. I brag now, because just six months ago any characters besides those would have been unrecognized and dismissed by me as "freakin' weirdos." I could not have named a single other player in the Star Wars trilogy. But I'm familiar with most of them now, courtesy of my young mentors. I know Boba Fett and Bo-Katan. You can't trip me up on the difference between Greedo and Jar Jar Binks. A Tusken Raider? A Tie Fighter? Storm Troopers? Think I don't know those people? Ha! Think again! They've been guests at my grandsons' house!

The boys' talented mommy, my oldest daughter, was 100% responsible for planning and executing the Star Wars theme birthday party held recently in their honor. What a night! I was fortunate enough to be invited, to take pictures and to marvel at how a young mother of two sets of twins - all of them under six years old! - could pull off such a fete with such aplomb! 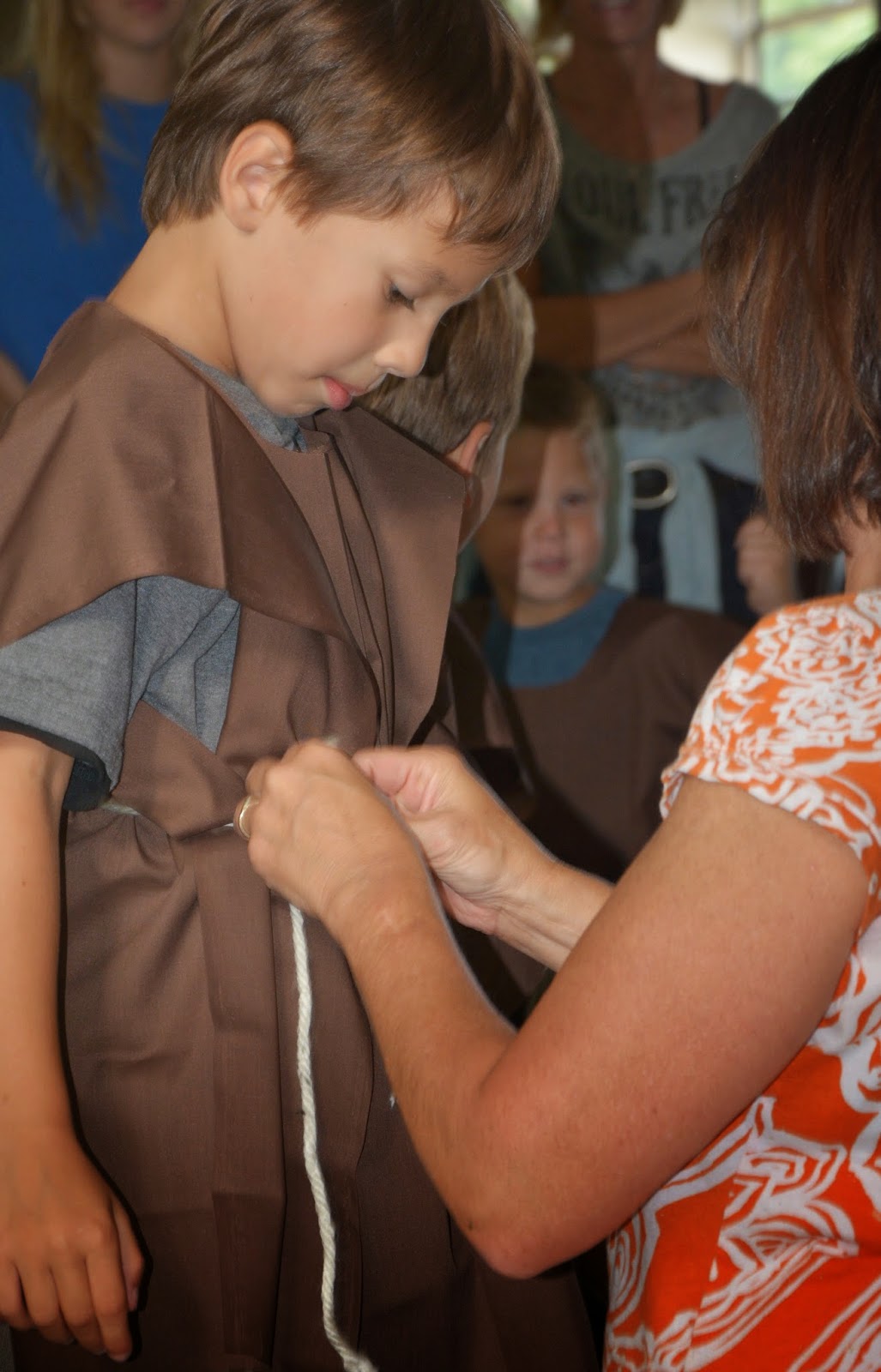 "You really had to be there," they say. So come on in! Join me and eight little boys on a journey that begins the moment we step inside the front door!

Upon arrival, guests are informed that they've been selected to train as Jedi warriors. These are the "good guys." They wear brown robes. They carry laser swords. They are quick and athletic and it's suspected that they'll have no trouble completing a series of tasks that will earn them admission to this elite force.

Parents are invited to stay, and all of them do so. They help little warriors become presentable for the rigor ahead. 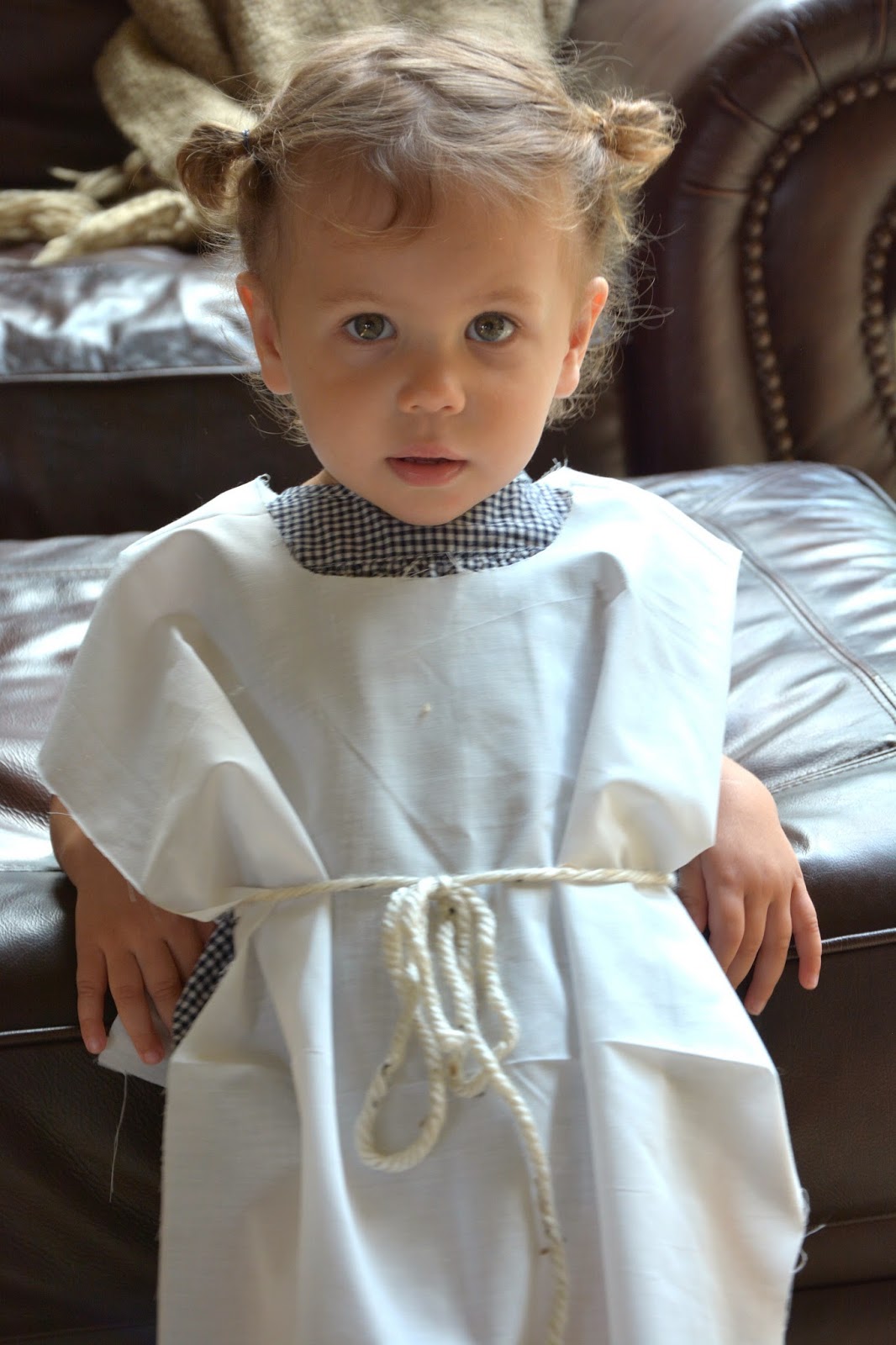 But no, not this winsome Miss Leia! She is one of the boys' twin little sissies, both serving tonight as portable "party decorations!"

The actual task is to attack a galaxy of blue balloons, popping as many as possible, in pursuit of a Princess Leia figure. The boys go after them with a vengeance, and arrive one step closer to becoming certified warriors when the damsel is recovered. 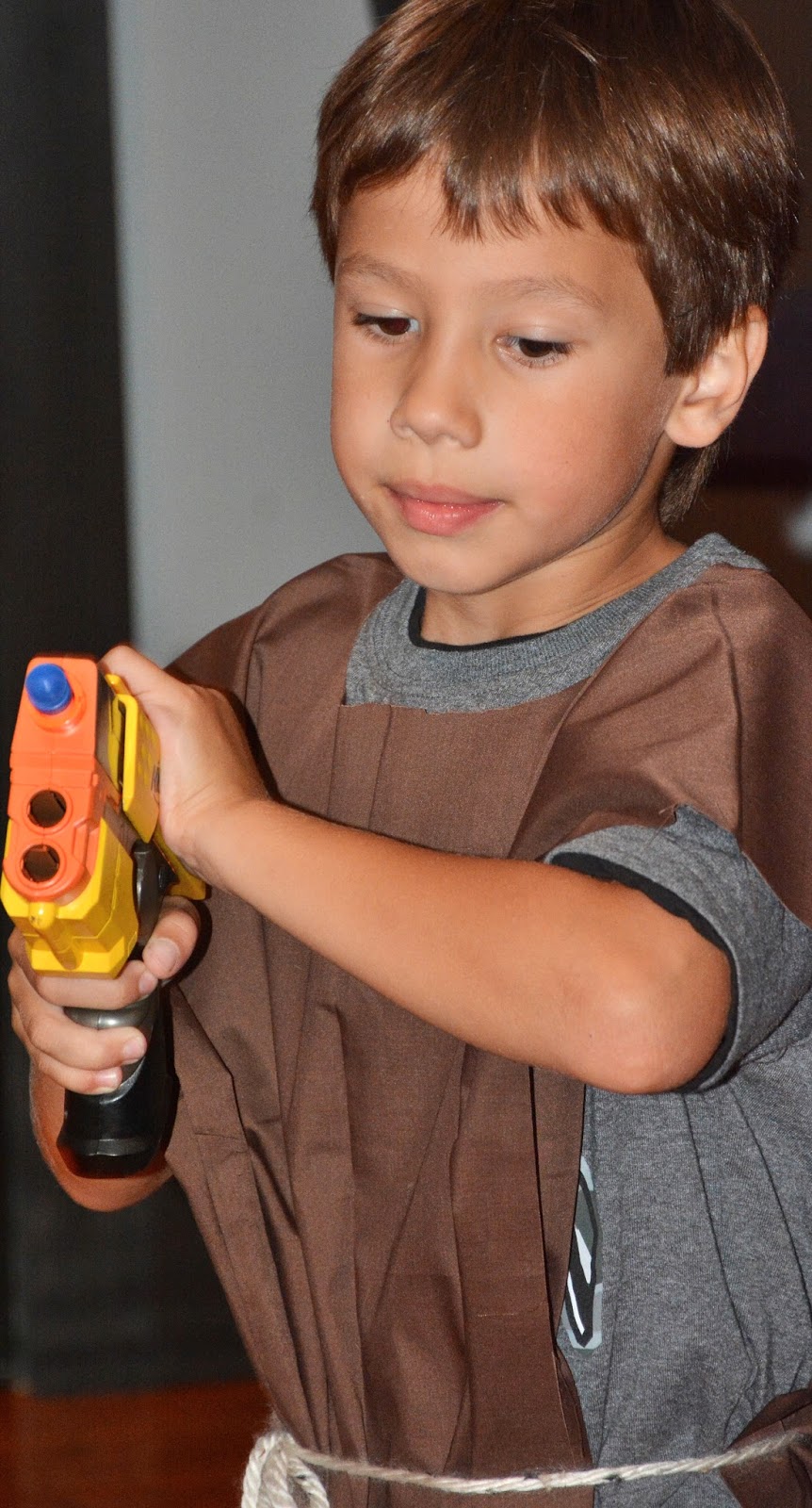 We arm ourselves to shoot down the "Death Star." That's headquarters for the "bad guys." Tonight it is represented by a large illustration taped to the wall. Little guys line up to take Nerf gun shots at it and many of them score a bull's eye!

The boys move next to agility testing. They hop across a (paper) stream of "hot lava," being careful to touch only "rocks" with bare feet. They climb a play loft ladder and whip down the slide to move ahead. So far, not a single slacker in the bunch! 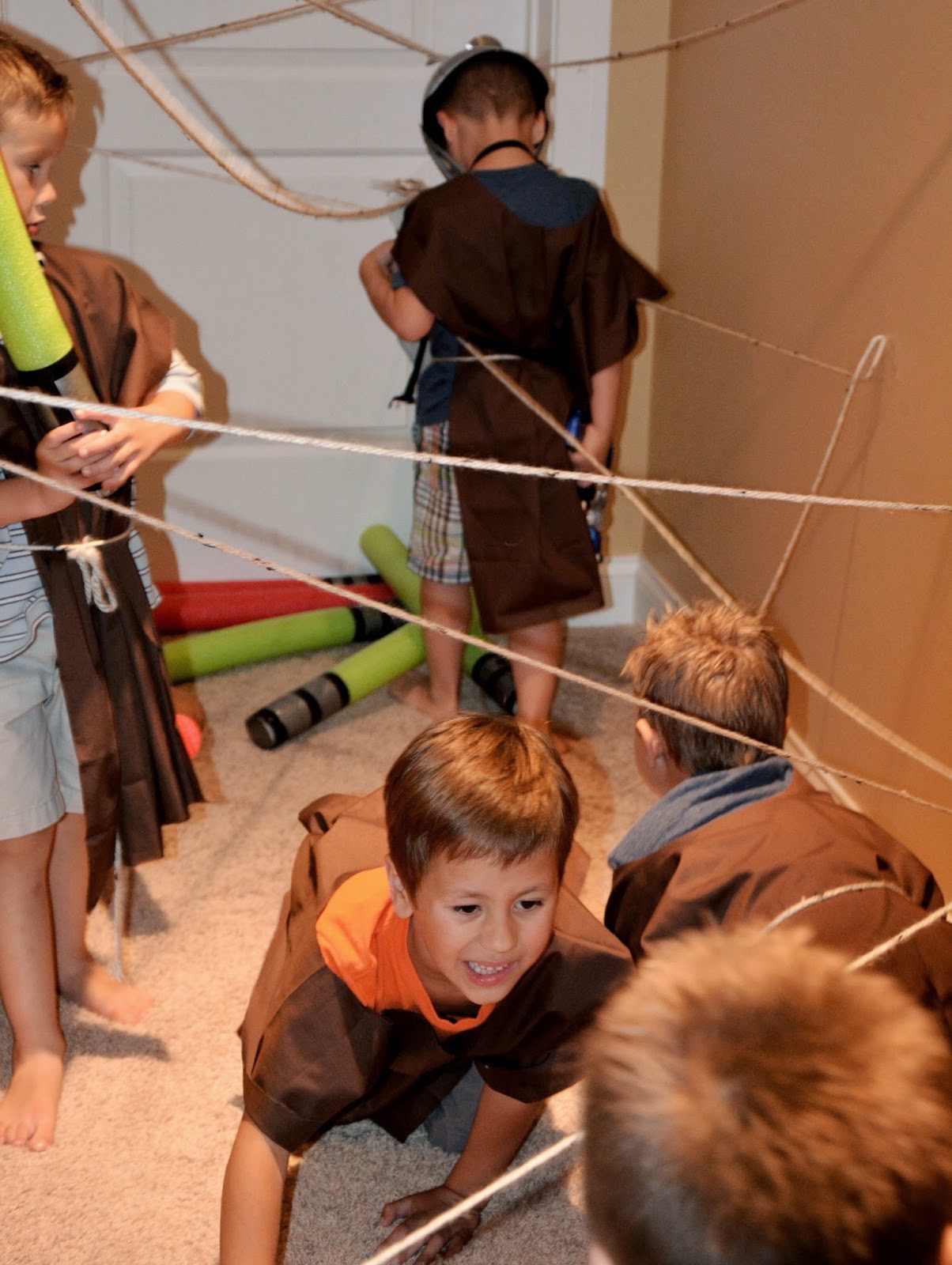 With a satisfying end in sight, the warriors can now be trusted to handle the cache of laser swords at the end of the hallway. But what they discover in their path is a dangerous maze of deadly light beams! Will each one be able to safely maneuver their way to the end and back with prize in hand?

Jedi warriors keep laser swords handy for one major purpose - the defeat of Darth Vader. Is it possible that these newly enlisted recruits could handle that formidable task? Well, let's see! 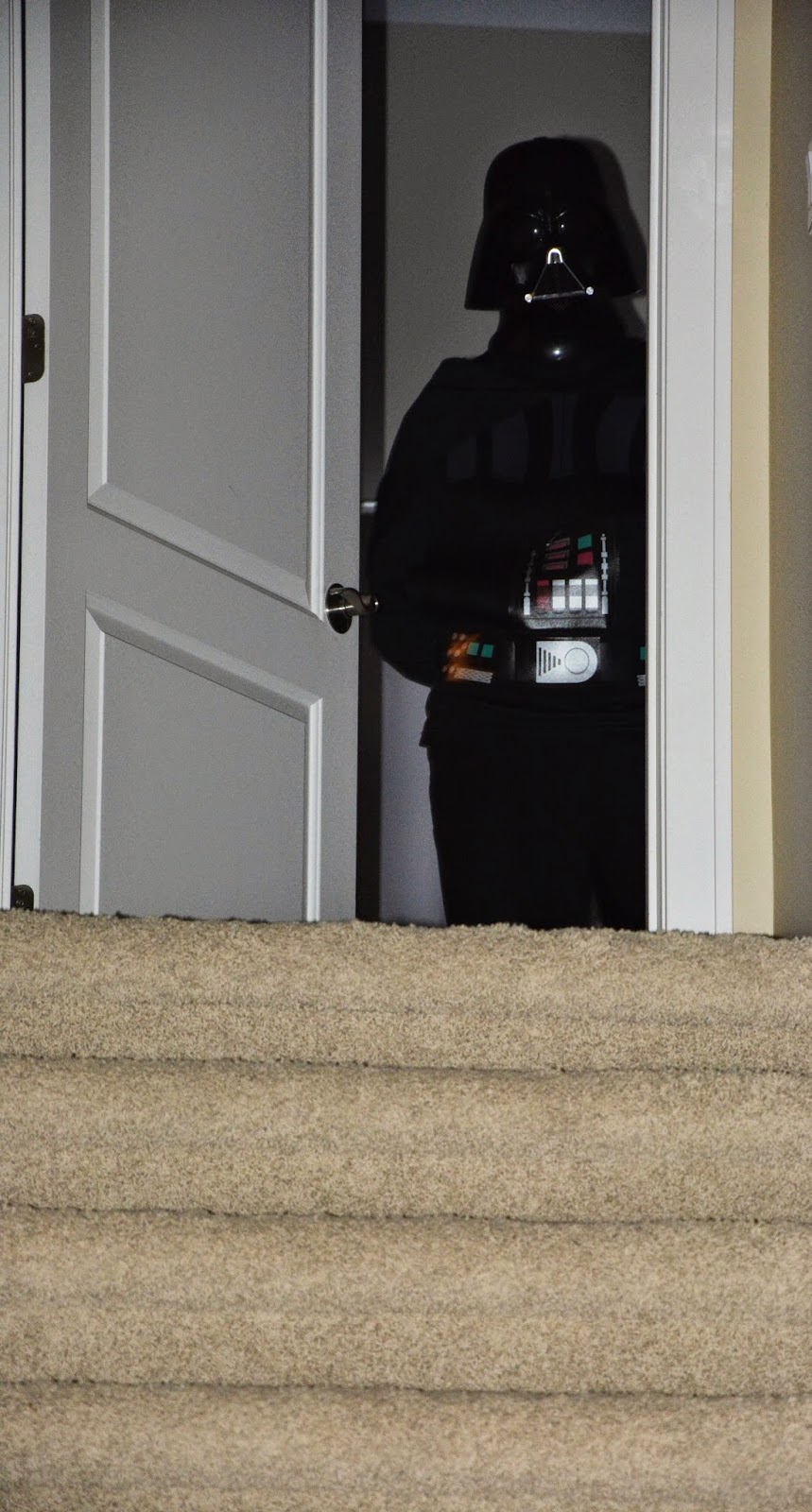 Warrior candidates are urgently summoned to the base of the staircase. Familiar haunting music..."dum dum dah dum" sets an ominous tone.....and out of the shadows appears......the arch nemesis of the brave Jedi force!

He enters enemy territory and immediately succumbs to the effect of eight "pool noodle" laser swords!

The "bad guy" lays prone on the ground and junior Jedi forces cheer victory! They have earned their certificates!

Once the award ceremony has concluded, an urgent message is beeped in on mommy's walkie-talkie. She looks horrified! "Oh no! You're kidding me!" she exclaims. It sounds serious. But she glances at her newly installed troop of good guys and breathes a sign of relief. "We can handle this!" she thinks. She tells the boys that the house has been invaded by Darth's seekers of revenge. They are needed to brandish their pool noodles - oops! I mean "deadly laser swords!" - and creep upstairs to see what's what. 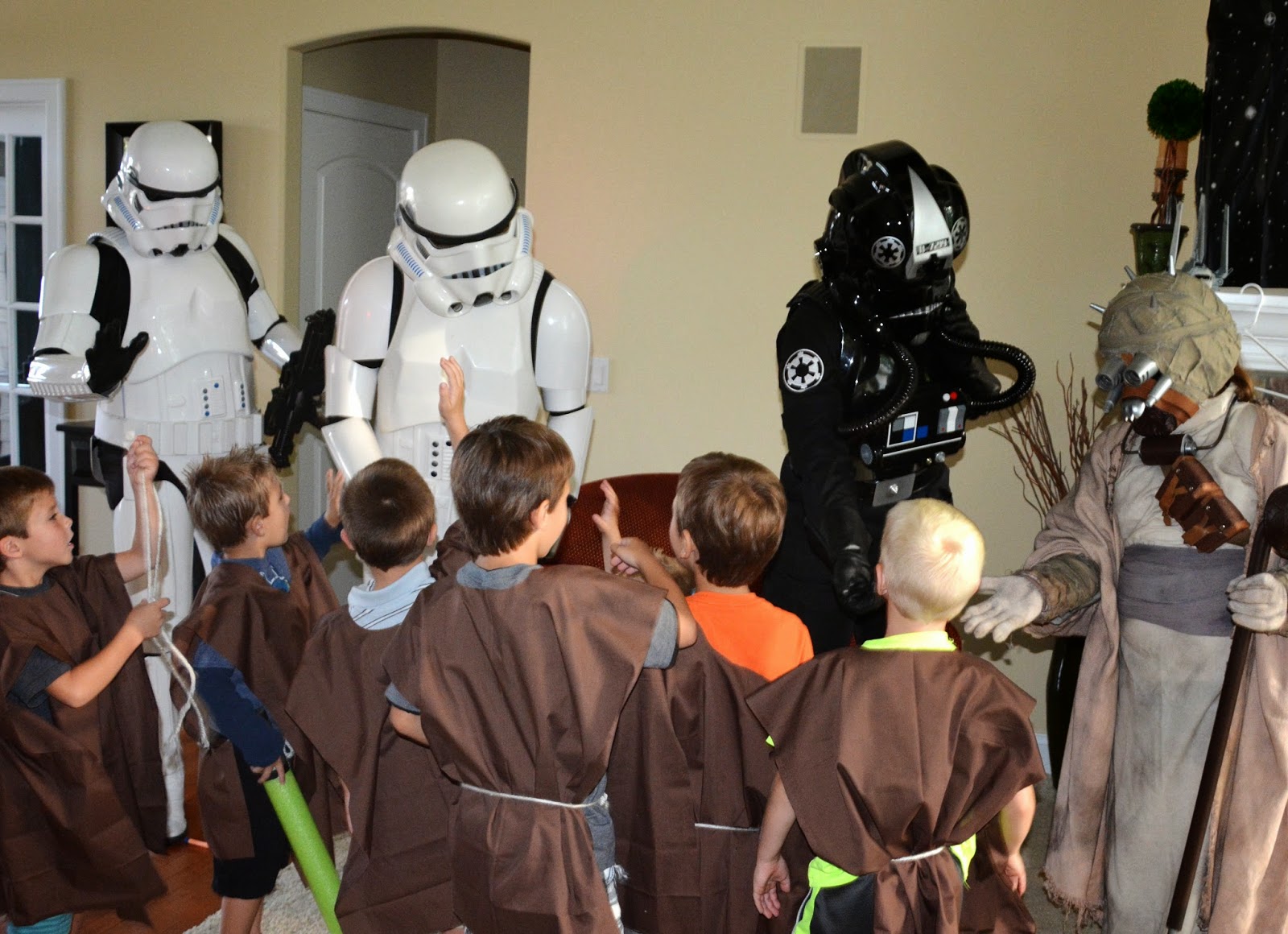 Storm Troopers! A Tie Fighter! A Tusken Raider! The sheer larger-than-life volume and commanding presence of each character is overwhelming. The boys initially gasp in disbelief and retreat in hesitation. But soon they re-approach, eager to shake hands, ask questions and enjoy a once-in-a-lifetime encounter with folks who've traveled from a galaxy far, far away for the sole purpose of delighting a party of six year old warriors! 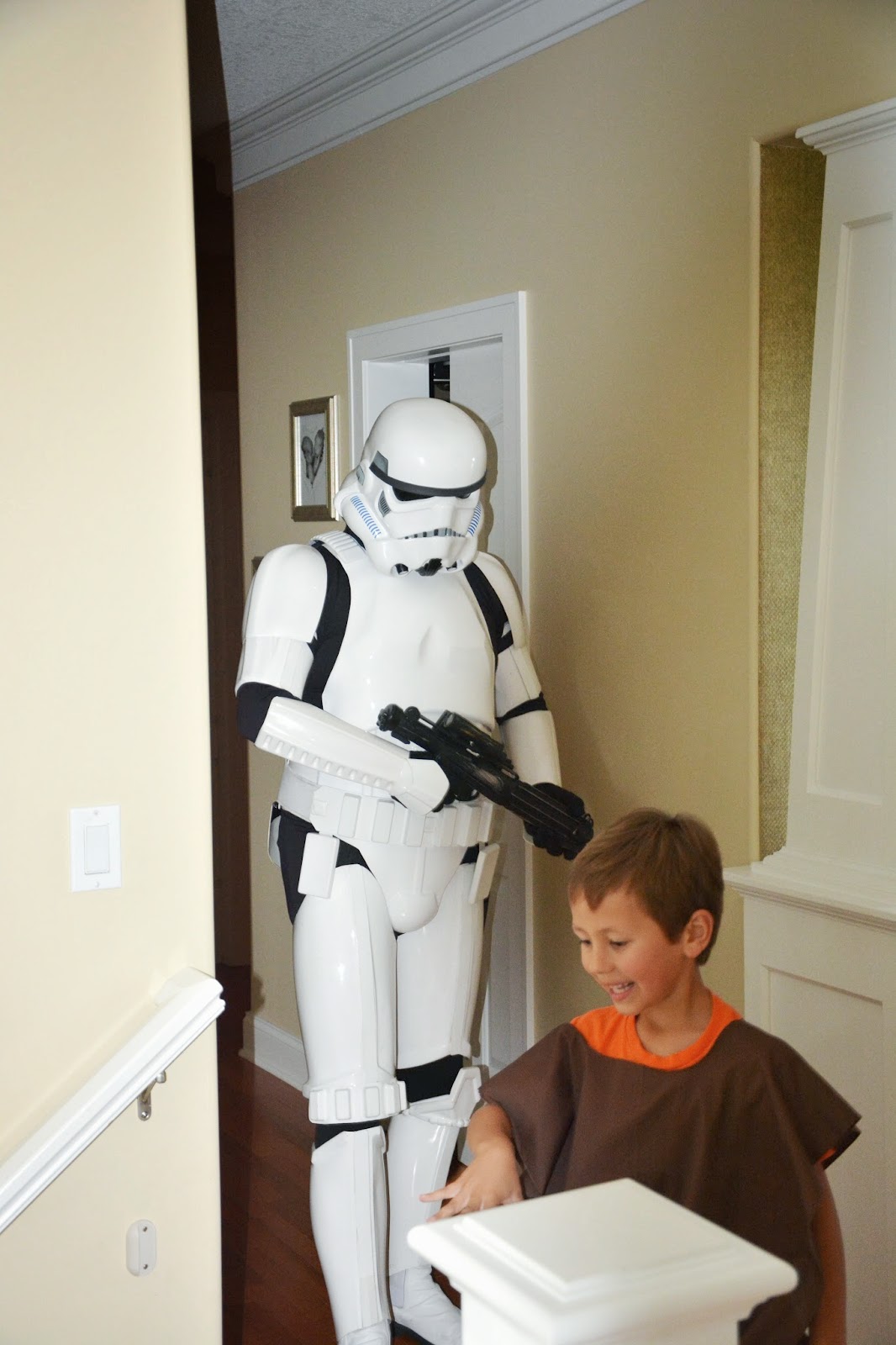 Nick saw them first and encouraged his friends to come back upstairs. "They're harmless," he seems to be advising - but (gasp!) - LOOK BEHIND YOU, NICK!!!!!! 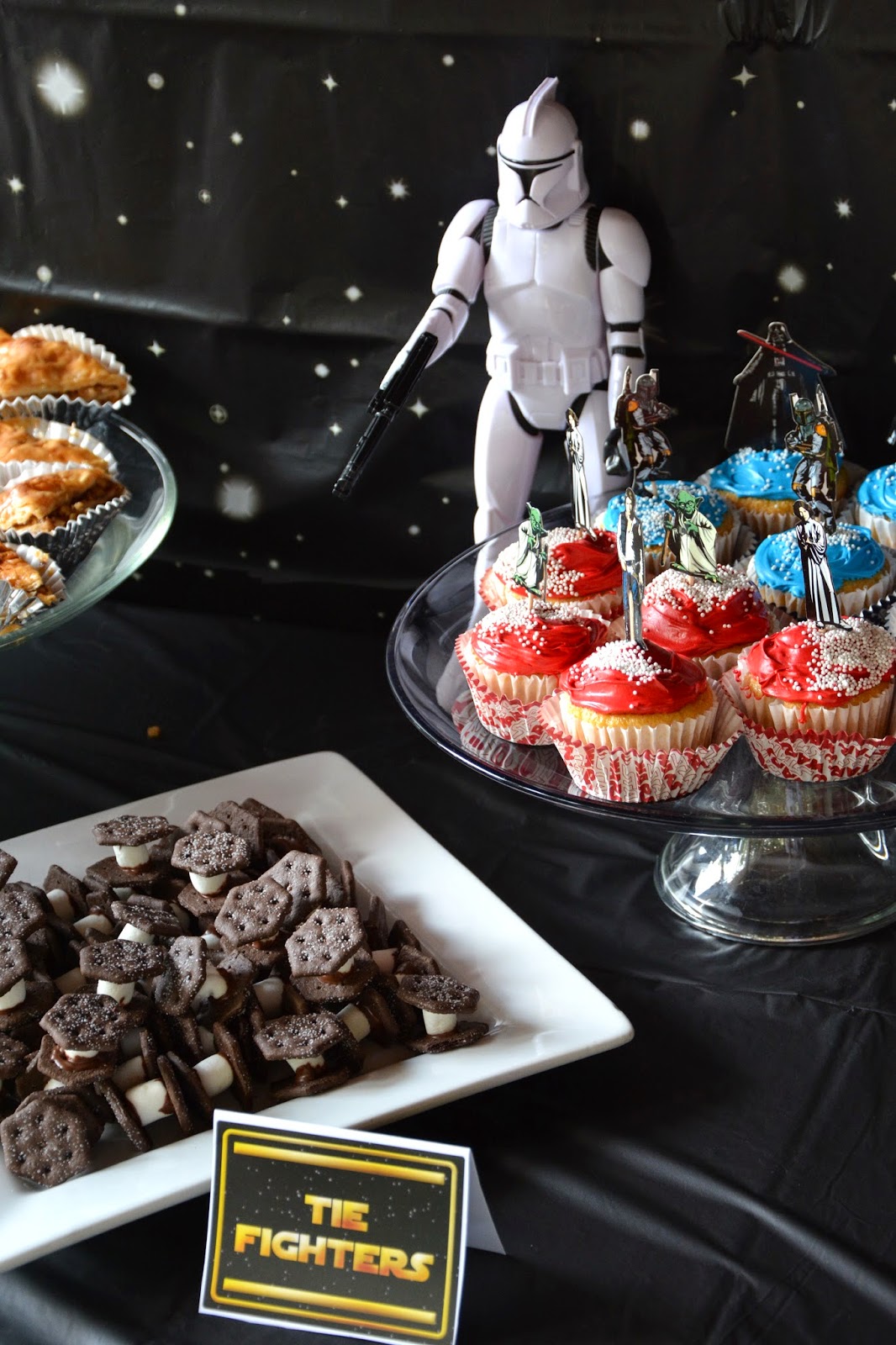 I'm sure delivery men are no strangers to wacky goings-on at the houses they visit, but this one nearly falls off the porch when his eyeballs meet a pair of Storm Troopers at the door! He leaves with a nice tip and everybody's invited into a dark, starlit space station to snack and congratulate one another on a job well done in Jedi training camp! 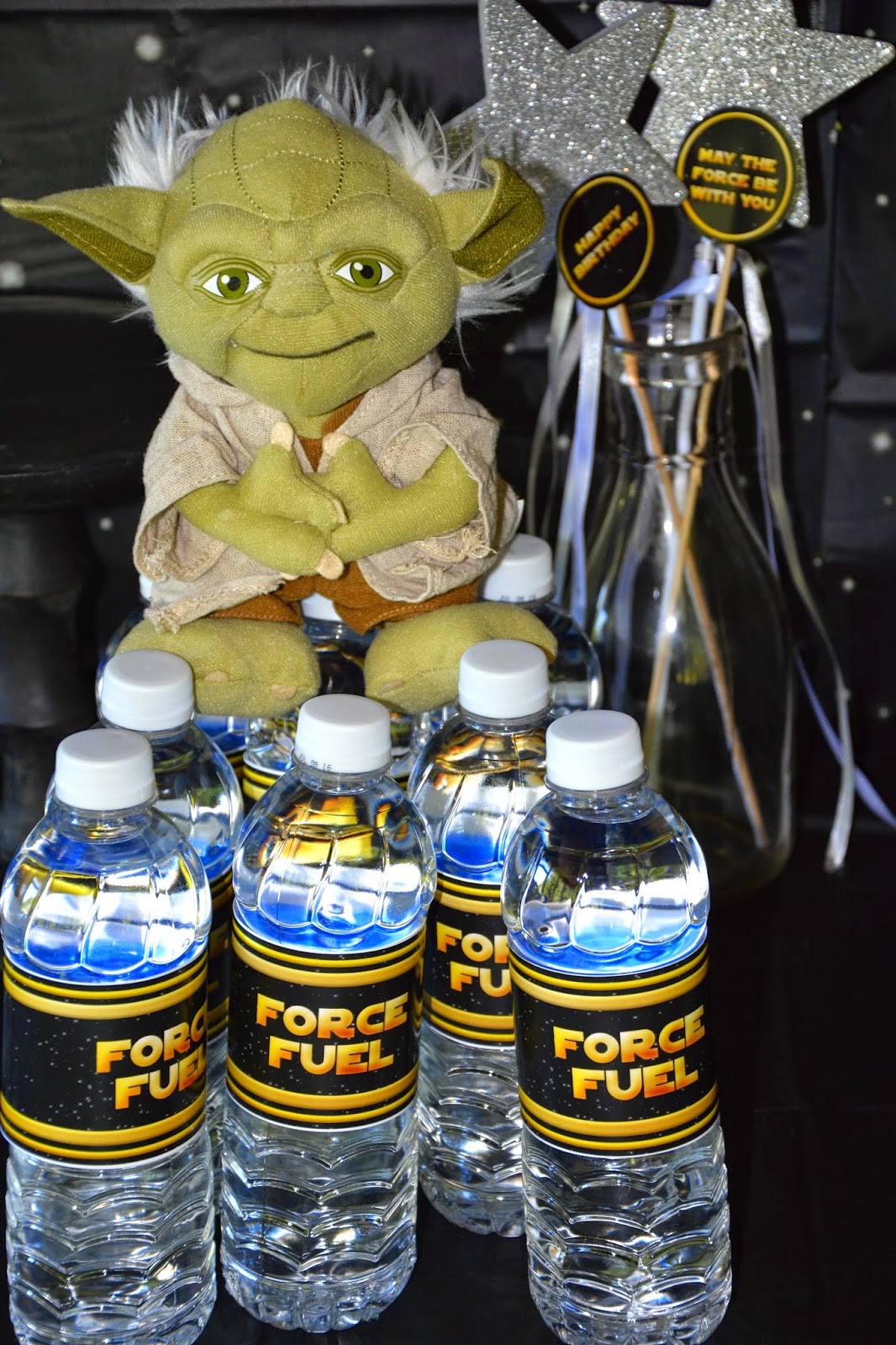 Yoda oversees hydration with a line up of force fuel.

That, along with "Yoda Soda" (a sizzling green combo of Sprite and lime sherbet) are needed to wash down birthday cake too! 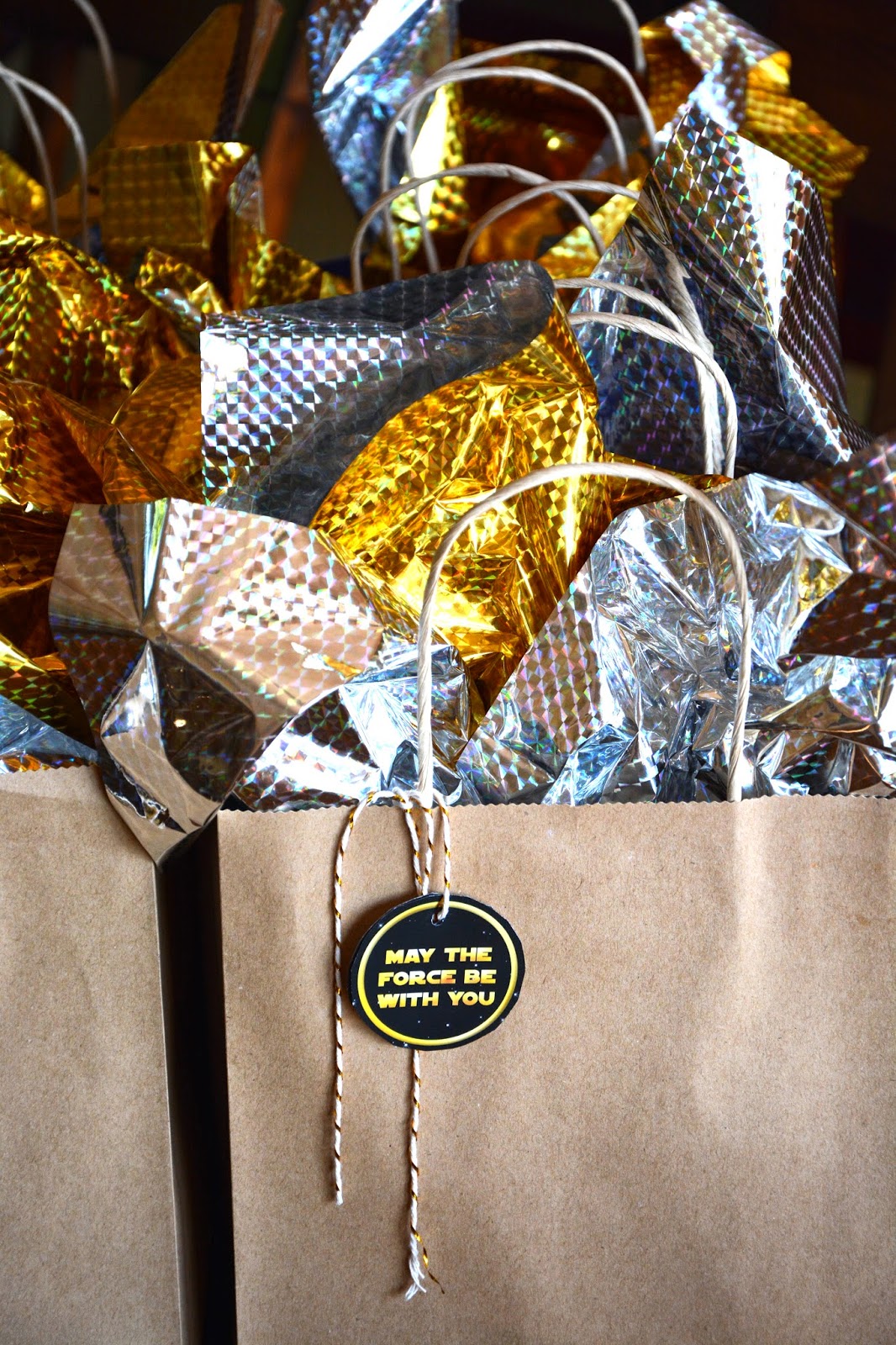 The boys open some terrific gifts and then it's an invitation to conclude the evening with an outdoor viewing of the "Lego Star Wars" movie. A cozy fire pit alongside a wine and appetizer bar await parents on the patio. 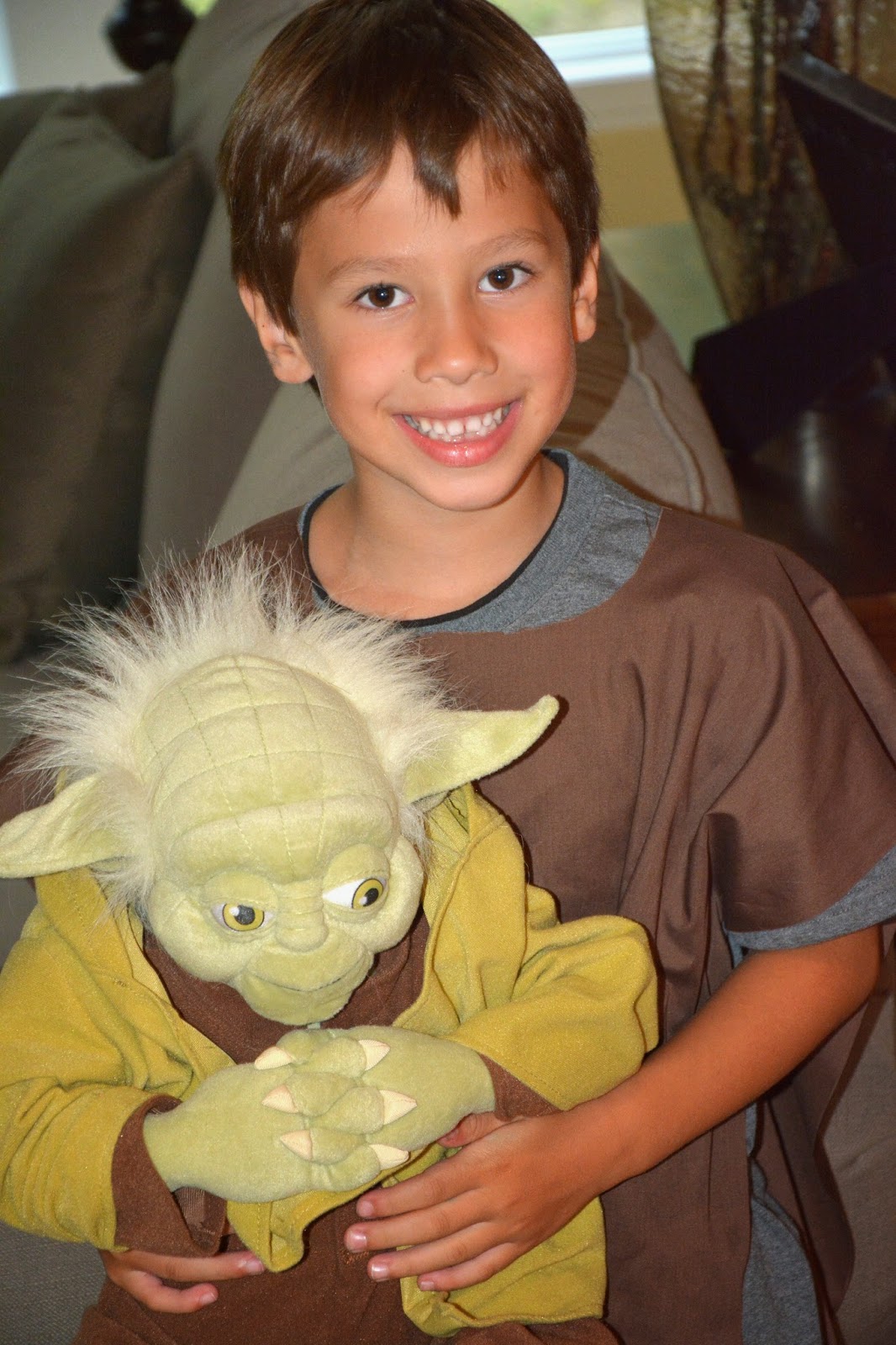 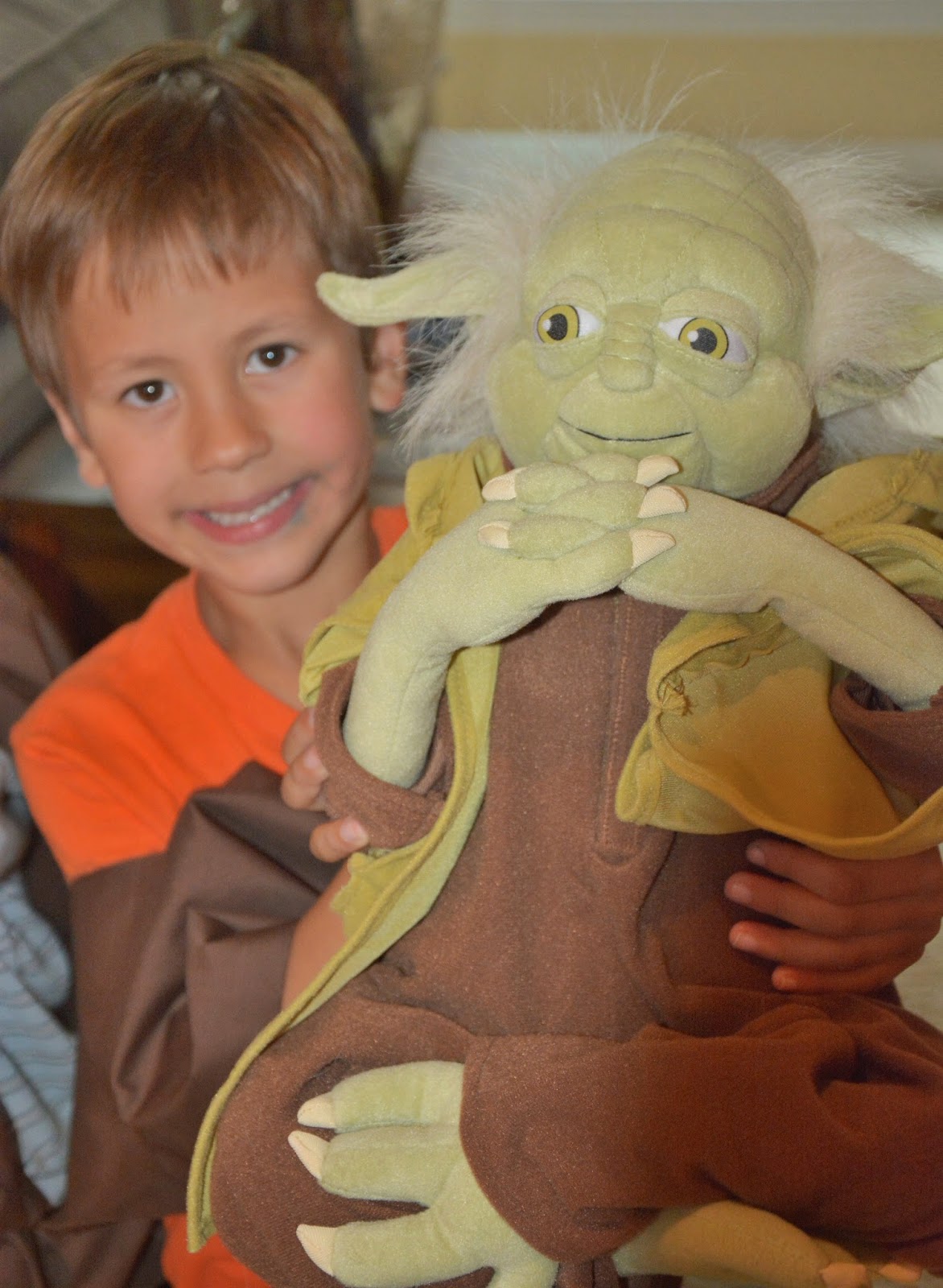 "Thank you, thank you, THANK YOU!" The boys' list of things to appreciate could stretch to the next planet, but they give it a stab anyway......

"Thank you friends, for coming to our party! Thank you for the wonderful birthday gifts - including our cuddly Yoda dolls from A.J. and Mikey. Thank you Storm Troopers and Tie Fighter and Tusken Raider for the surprise visit! Thank you daddy's friend, Mister Chris, for pretending to be Darth Vader! Thank you little sisters for being the cutest mini-Princess Leias ever! Thank you daddy, for making sure mommy had plenty of help today!" And........

THANK YOU mommy, for once again putting your whole loving heart, boundless energy, amazing creativity and endless patience into a celebration that made us so very, very happy that we are yours! 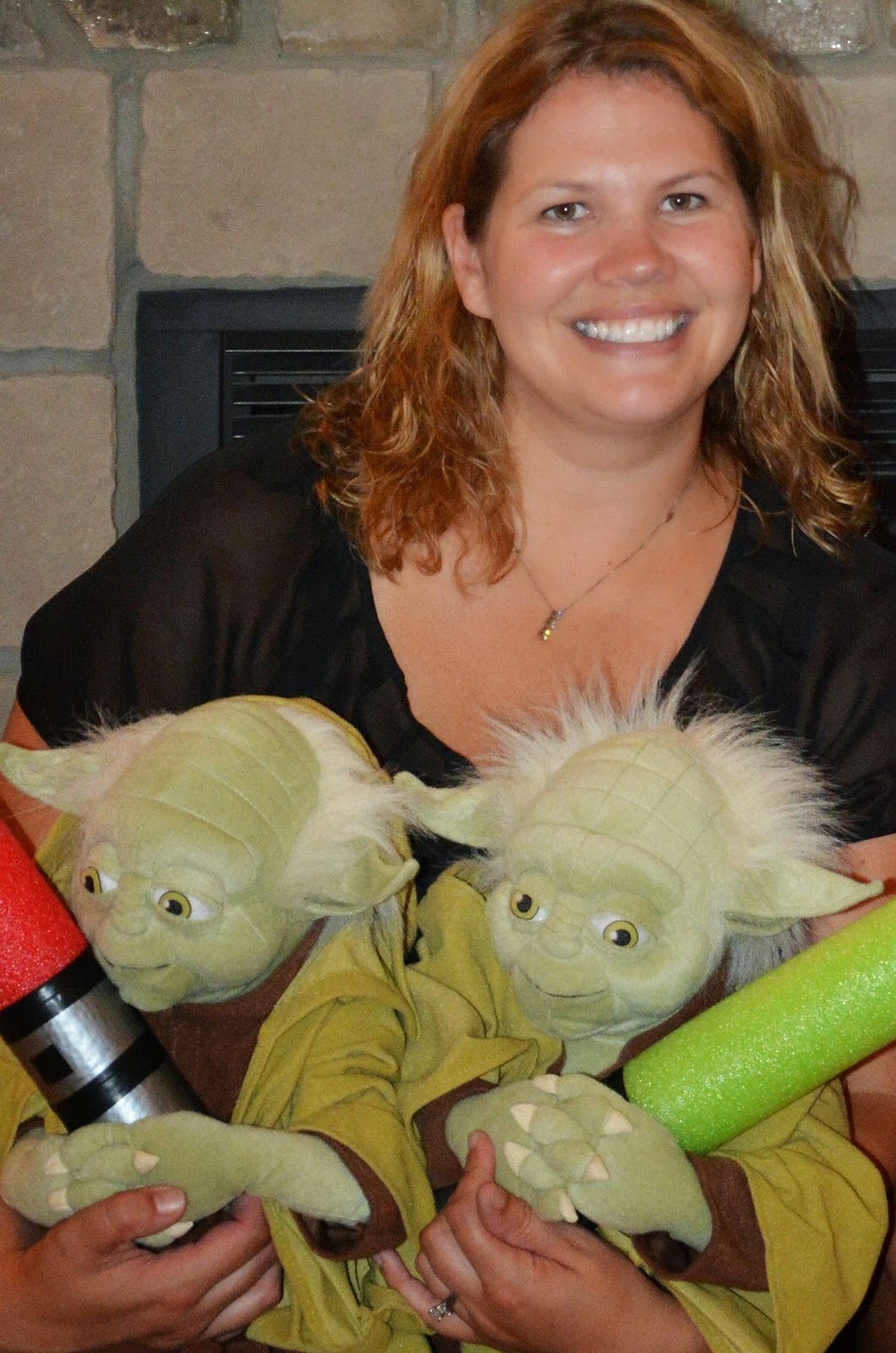 In our lives, mommy, "the force" is YOU!

The Star Wars characters who visited our party belong to an international organization of volunteers who make appearances in exchange for donations to charity. Mary Jo chose the Make a Wish Foundation from a suggested list. The four actors who came drove over an hour each way to delight our young guests. They were prompt, professional, patient, and wonderful with the children, even presenting small Star Wars gifts to the birthday boys. Investigate them at their 501st.com website for more information.

"Printables" make any party look neat and coordinated. The ones used at this event were found on Etsy in the "Hello My Sweet" shop.
Posted by J at 5:23 PM