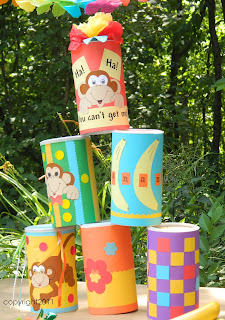 I was going to title this post with something trite, like "everybody loves a carnival," but then I remembered how I used to hate those affairs. I thought the workers were nasty and I was scared to death of the rides - even the ones that stayed close to the ground. And never did I see anybody actually win one of those tantalizingly huge stuffed animals that lure people to unwinnable games.

How my attitude changes when I get to be in charge of it all! No creepy people among us, game booths safely made of cardboard, and best of all, lots of prizes for everybody, even if you somehow, some way, still manage to find a way to be a "loser!"

I had the best time planning and constructing the games, allowing about four months lead time to work everything out with my oldest daughter, Mary Jo, the mother of my twin grandsons.

We negotiated a date of Saturday, July 9. 2011 for our event, hosting it on the spacious front lawn of her home.

A total of nine families were involved with a "kid-count" of 17 - plus a handful of sibling babies.

Lots of work? Oh my, yes! But sooooo worth it! Everyone had lots of fun, mostly, I think, because it was so kid-friendly. I am not a fan of early age competitions that clearly identify "winners" and, by default, "losers." My grandchildren are not "losers" and neither are yours! Dollar stores are full of enough cute prizes for everybody and I say buy them! Send every child home happily tattooed, clutching fistfuls of candy, a tote bag brimming with prizes and fond memories to revisit many, many times!

I chose not to open this introduction with a cliche, but I am going to conclude with one. "A picture is worth a thousand words!" Here's the story of our first annual family carnival! 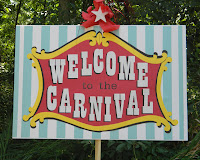 As children arrived, they were handed a welcoming program  describing games, a handful of tickets, and a cute paper bag to stash prizes in. 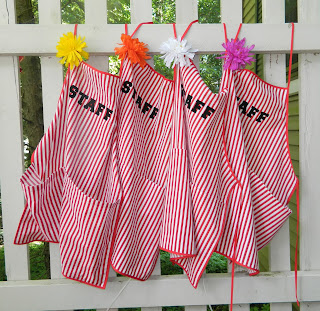 I admit to copying the "welcome" sign design from the Oriental Trading catalog.....hope they don't mind! (I spent hundreds with them!)


MONKEY SMACKDOWN is my favorite of the game booths. The idea was born after I "went bananas" over these cute inflatable monkeys at Wiley and Company - a great local store where I found lots of wonderful things for this event! 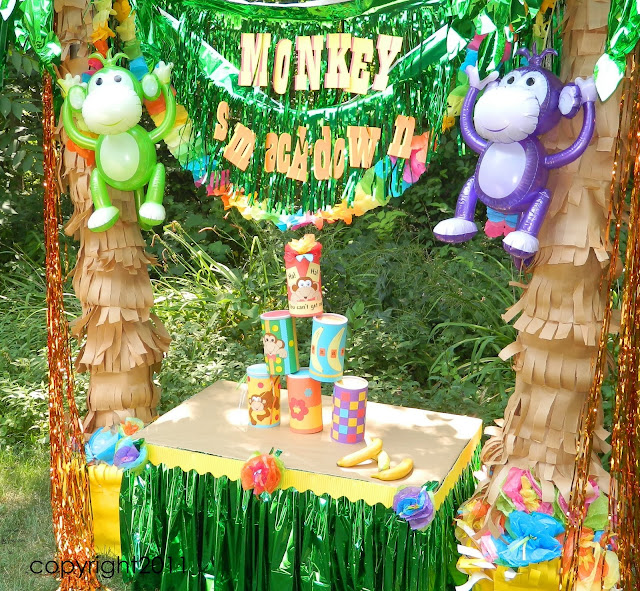 Kids were invited to knock down the decorated oatmeal cans by tossing plastic bananas at them. We were surprised at how well they did! Staff was kept very busy restacking the cans! 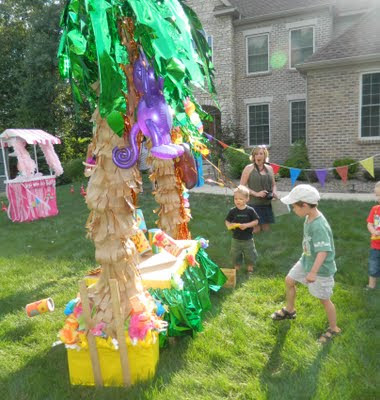 One of the best things about having grandsons after a family of all girls is shopping for toys. Oh, the enchanting world of dinosaurs, pirates, firetrucks and...ALIENS!

We invited "boys only" to our ALIEN INVASION booth. They were to choose an alien, either by number or favorite character. Everyone paused expectantly while Beth cautiously lifted it up to see if a "little green man" was hiding beneath! If he was, the player was a WINNER!  (um, I think you may have already guessed that a little green dude lurked beneath every number!) 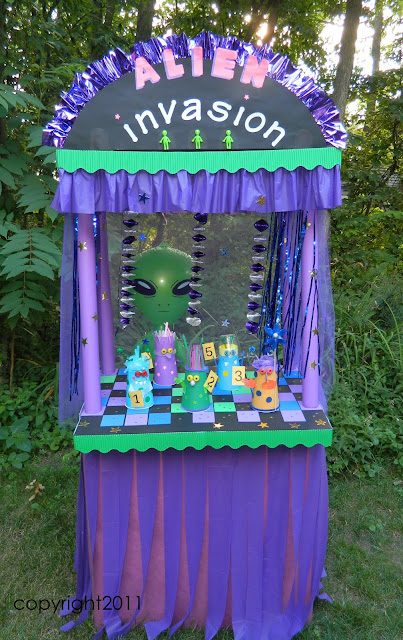